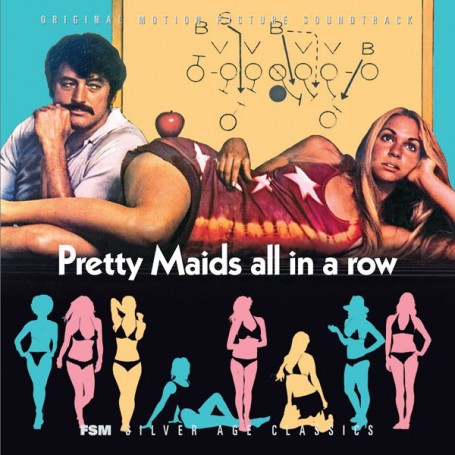 PRETTY MAIDS ALL IN A ROW

Pretty Maids All in a Row (1971) was the first theatrical feature written and produced by Star Trek creator Gene Roddenberry. The black comedy, set in a California high school at the height of the sexual revolution, concerns a popular guidance counselor and football coach (played by Rock Hudson) who has a habit of sleeping with—and possibly murdering—his nubile young students. The film was the American directorial debut of acclaimed French filmmaker Roger Vadim (Barbarella) and its approach to sexuality reflected his European viewpoint (not to mention his own particular fascination with the female form on film).
Maids needed a composer who could encompass both the pop styles of the day and grittier, more dramatic passages for the picture’s darker side. Lalo Schifrin—with his background in jazz, his classical training and his openness to experimental musical ideas—was the perfect choice to score the film.

Schifrin’s main title is a breezy song (with double-edged lyrics by Mike Curb) sung by the popular bubblegum group, The Osmonds. Its apparent innocence is deceptive, however, for the rest of the underscore is spare and moody. Fender Rhodes piano and cimbalom color the orchestration.

Pretty Maids All in a Row called for an unusual amount of source music: in fact, Schifrin recorded over 20 minutes of it, working in a variety of styles but always complementing the mood of the specific scenes.

This FSM CD presents Schifrin’s complete score—including some music not heard in the film—for the first time in any format. Notes by Jeff Bond and Alexander Kaplan detail the film’s history, including the interesting relationship between Roddenberry and Vadim. FSM’s customary track-by-track commentary highlights Schifrin’s contribution to the story telling.

Pretty Maids All in a Row is so at odds with today’s social and sexual mores that it appears to come not just from another decade, but another dimension. The music, however, is solid Schifrin, and sure to please his legion of fans.

Pretty Maids All in a Row