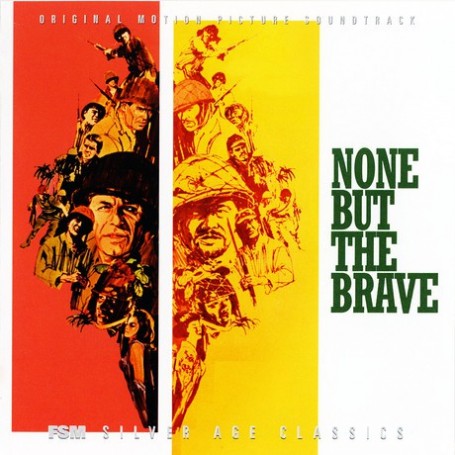 An important dramatic score from the early career of John Williams is released in complete stereo form by FSM: None But the Brave (1965), for a WWII film about a small contingent of Japanese and American soliders making an uneasy truce on a small South Pacific island until war rears its ugly head. The picture is perhaps best remembered as the first (and only) directorial effort of Frank Sinatra, starring Sinatra in a small role alongside Clint Walker, Tony Bill and a diverse group of American and Japanese actors (it was co-produced by American and Japanese studios).

For film music fans the star is John Williams, then known as “Johnny” and transitioning to feature films after productive years in television. Most of Williams’s early films were comedies but None But the Brave was a notable exception, giving Williams the opportunity to write a broad, majestic main theme, with ambitiously chromatic counterlines somewhat in the style of his contemporary, André Previn. The body of the score blends tension-filled moments informed by Williams’s dramatic scores for television; atmospheric and suspense writing that anticipate his future blockbusters (from Close Encounters to Raiders of the Lost Ark); and even lighter passages recalling his comedic work. The story also allows for sensitive depictions of the Japanese as well as American characters, and these feature carefully designed Japanese-flavored colors (decades before Memoirs of a Geisha).

Fans of the composer who thought they knew every last note of his oeuvre, and have hungered for new Williams CDs, will delight in this uncovered gem. It is fascinating to hear his development as an artist, as well as the voice he offered for cinema of the 1960s. And if you like his Lost in Space television music, there is at least one cue (“The Final Fight”) that will make you exclaim, “Danger, Will Robinson!”

FSM’s premiere CD of None But the Brave features the complete score newly mixed from the original ½' three-track stereo scoring masters; as recorded by Dan Wallin on the Warner Bros. stage, and engineered for FSM’s CD by Mike Matessino, it sounds like it was recorded yesterday. Bonus tracks include Williams’s music for the film’s trailer, a piano solo performance of the theme (performed by the composer), and the commercial single recording of the main theme in the pop style of the day. Liner notes are by Jeff Eldridge.

None But the Brave