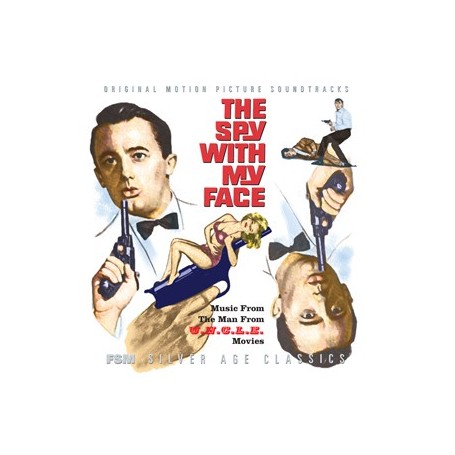 THE SPY WITH MY FACE: THE MAN FROM U.N.C.L.E. MOVIES

The Man From U.N.C.L.E. (1964-1968) was one of the most popular—and best scored—TV series of its era. For four seasons (as well as a spin-off series, The Girl From U.N.C.L.E.), composers such as Jerry Goldsmith, Morton Stevens, Lalo Schifrin, Gerald Fried, Robert Drasnin, Nelson Riddle and Richard Shores provided exciting, jazzy and suspenseful scores for the series' globetrotting spy adventures.

The Man From U.N.C.L.E. was so successful that M-G-M created no less than eight feature films, primarily adapted from the series' two-part episodes. These films were by and large destined for the international audience, and to this day many fans throughout the globe know U.N.C.L.E. not by the television episodes, but the feature-film adaptations.

For this reason, this fourth volume of Man From U.N.C.L.E. music from FSM—following our three 2CD sets released in 2002, 2003 and 2004—is a definitive collection of the feature-film soundtracks, intended to please the fan who discovered U.N.C.L.E. via the big screen, as well as anyone interested in yet more unreleased music from the franchise.

The films themselves ran the gamut from having mostly original scores (such as Gerald Fried's stereo music recorded for One of Our Spies Is Missing and The Karate Killers); to featuring new music written by the same composer as the related TV episode (such as Morton Stevens's music for The Spy With My Face); to mostly reusing the TV episode scores, often with a newly recorded main and end title.

Whatever the case, all eight feature films are represented on this CD, with the most space devoted to the ones with original music. While some cues were previously included on our earlier volumes, most have never before been released, and all of the selections are programmed to reflect their feature-film incarnations, rather than the television sources. Music from One of Our Spies Is Missing, The Karate Killers and How to Steal the World is in stereo; the other scores are in mono, although the trumpet solo in the main and end titles for To Trap a Spy has been panned to the right to give an impression of stereo.

As always with FSM's U.N.C.L.E. releases, the album has been produced and annotated by renowned U.N.C.L.E. music authority Jon Burlingame, whose liner notes chronicle the origins of each score and cue.

The Spy With My Face

Music From The Man From U.N.C.L.E. Movies