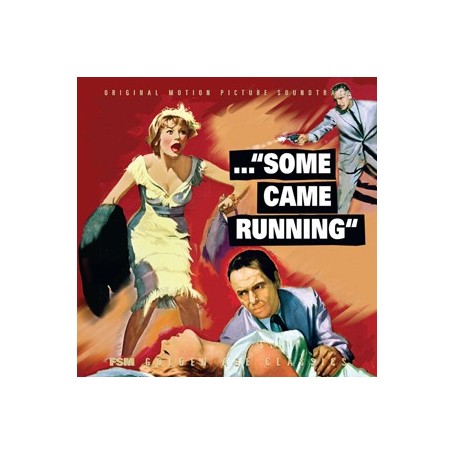 Some Came Running (1958) was a prestigious adaptation of James Jones's second novel, a gargantuan tome about a serviceman (Frank Sinatra) who returns to his rural Indiana hometown following World War II. While struggling to find his purpose in life, he is torn romantically between a luckless floozie (Shirley MacLaine) and an intellectual schoolteacher (Martha Hyer) who appreciates his ambitions as a writer but spurns him romantically. The film features first-rate performances—including Dean Martin as a laconic gambler—and masterful direction by M-G-M's Vincente Minnelli.

Some Came Running was scored by a composer ideally suited to capturing all of the film's aspects: Elmer Bernstein. This was Bernstein's most glorious period, in which he was writing landmark scores for everything from biblical epics (The Ten Commandments) to westerns (The Magnificent Seven) to dramas (To Kill a Mockingbird)—with jazz scores like The Man With the Golden Arm especially capturing the public's attention. Some Came Running continued his association with Frank Sinatra—for whom he scored The Man With the Golden Arm and Kings Go Forth—and offered another opportunity for his brand of big band "film jazz" that had become one of the most dominant and effective sounds in cinema.

Some Came Running required from Bernstein not only a jazz score, but moments of musical Americana for high-minded drama involving life in small-town America. The film practically uses his music as a narrative device to illustrate the two "worlds" in which Sinatra walks: a "legit" orchestral sound for polite society, measured yet evocative, with a love theme for the schoolteacher; and a bluesy, jazzy sound world for the nightlife, with questing woodwinds, ominous bass lines and madcap piano climaxing in a furious chase sequence that leads to the film's tragic conclusion.

Bernstein also interpolates a song by regular Sinatra collaborators Sammy Cahn and James Van Heusen, "To Love and Be Loved," making it his own through the orchestration, and provides several original big band source cues. "To Love and Be Loved" is sung on-screen during a nightclub sequence, which is included on the CD. (Neither Sinatra nor Dean Martin sing in the film or on the CD, however.)

Some Came Running is an Elmer Bernstein masterpiece that would have been released on CD by Rhino or FSM years ago but for an odd defect in the stereo master tapes (still not fully understood) that resulted in missing instrumentation in some cues. Fortunately, between the surviving stereo masters in the Warner Bros. vaults, a monaural tape kept by the composer, and acetates stored at the University of Southern California, the complete score has been reconstructed, almost entirely in stereo, with exemplary sound quality. This is cause for celebration, as this is one of Bernstein's—and the era's—very best. Liner notes are by Lukas Kendall.