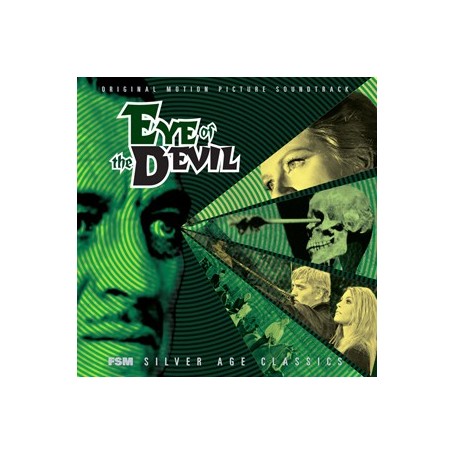 EYE OF THE DEVIL

FSM kicks off its 11th year of “Classics” releases with a score as excellent as it is virtually unknown: Eye of the Devil (aka 13) by Gary McFarland.

Gary McFarland (1933-1971) was a jazz composer, arranger and performer whose light shined bright during his brief career in the 1960s; he died young in semi-mysterious circumstances. McFarland was lauded for his melodic gifts and imaginative jazz orchestrations; he possessed the affinity for mood and simplicity of expression that marks most great film composers—so it was no surprise when he tackled his first film score in 1966, for Eye of the Devil (which also goes by the title 13).

Eye of the Devil (1966) was a troubled horror film directed by J. Lee Thompson starring David Niven as the patriarch of a wine estate in rural France. When the fortunes of the vineyard go bad, Niven is summoned to die in ritualistic sacrifice—the destiny of all male heads of the family. This is discovered slowly by Deborah Kerr as the man’s sympathetic wife, and the film’s telling from her point of view allowed McFarland to write a beautiful, melancholy and expressive melody that aches with her loss and heartbreak. The theme is utterly captivating and would have been worthy of Silver Age greats like Barry, Mancini or Morricone—though it is crafted in McFarland’s own style.

The film features a component of witchcraft—David Hemmings and Sharon Tate co-star as a brother-and-sister warlock and witch—and McFarland uses haunting wordless vocals to express the mystery and horror of the European gothic setting. For the film’s climax—as the ritual suicide is carried out—McFarland creates a kind of “bolero of death” for the fateful procession; here, as in the rest of the score, the dynamic arrangements are informed by the best symphonic jazz of the era, not simply of film music.

FSM is well-aware that Eye of the Devil is a film score few people have heard of—let alone want to buy. Please sample the music clips as McFarland was a major talent whose career was tragically cut short (he scored only one subsequent film)—and this is a magnificent work.

After being announced on LP in 1967 but never released (a master was prepared for Verve Records—all of its music is included here, and more), Eye of the Devil comes to CD at last remixed and remastered from the original three-track 35mm stereo masters recorded in London. Liner notes are by John Bender and Lukas Kendall. Special thanks are due to McFarland archivist Douglas Payne.

Editor's note, 9/08: We made a booboo in the liner notes. Gary McFarland's middle name was Ronald, not Raymond, as incorrectly stated. Gary Ronald McFarland. Now we know!

Eye of the Devil