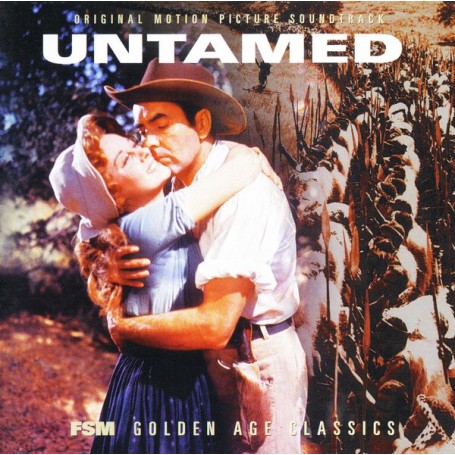 Many soundtrack collectors were introduced to symphonic film scores by John Williams. But Williams was introduced to the art form by the great Golden Age composers who were at their zenith when the younger man was getting started in Hollywood: Alfred Newman, Bernard Herrmann, Dimitri Tiomkin, Victor Young and many more. Of all of these names, none stands for quality, excellence and sophistication more than that of German emigrant Franz Waxman.

In 1999 we released Waxman's legendary score for Prince Valiant (1954). We now turn our attention to another grandly symphonic score Waxman composed for Twentieth Century-Fox: Untamed (1955). Untamed is a movie barely in circulation today but at the time it was compared with Gone with the Wind in its ambitious scope, if not in its execution: a sprawling, adventurous love story set amidst the mid-19th century Dutch colonization of South Africa featuring two of Hollywood's biggest stars, Susan Hayward and Tyrone Power.

Waxman's score to Untamed has always stuck in the memory of those who experienced the film and remains a benchmark among those who adore the Golden Age of film music. It features a thrilling main title—quintessentially Waxman Hollywood—with a soaring main theme erupting from the horn calls of an Irish fox hunt. From there Waxman follows Hayward's character to South Africa through a prairie caravan, Zulu attack, and rescue—through triumph, despair and back again—all the while developing the main theme and introducing an evocative love theme.

The master elements to Untamed have survived in terrific condition, allowing Waxman's complete underscore—plus some source cues—to be presented in chronological order, in stereo. In addition, the track "Zulu Attack" has been created as a dramatic collage of the numerous jungle drum and attack noises recorded under Waxman's supervision on the stellar Fox scoring stage. For large-scale, melodic and symphonic film music Untamed can't be beat!