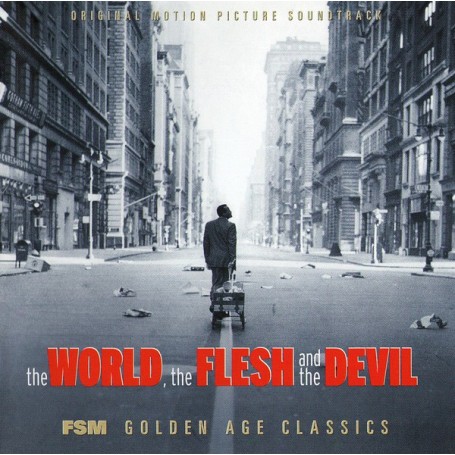 THE WORLD, THE FLESH AND THE DEVIL

The World, the Flesh and the Devil was one of two films released in 1959 that reduced a story about the destruction of civilization to purely human terms. While On the Beach (FSMCD Vol. 5, No. 7) detailed a long and agonizing countdown to the end of all human life on Earth, The World, the Flesh and the Devil posited the destruction of humanity by "sodium isotope gas," leaving only three survivors (played by Harry Belafonte, Inger Stevens and Mel Ferrer) who must rebuild their lives from the ashes of civilization's end.

The World, the Flesh and the Devil is one of three science fiction films Miklós Rózsa scored in his long career, the others being The Power (1968) and Time After Time (1979). Rózsa's grandiose music provides an epic backdrop for the end of all civilization, but also a human dimension for the characters and their struggles to maintain their sanity. Rózsa evokes his film noir scores in moody strokes for the first third of the film; embraces Leonard Bernstein-styled balletic jazz for a lighthearted sequence in which Belafaonte's character dances with his own shadows in desolate Manhattan; and develops a nostalgic love theme for the tentative romance between Ralph (Belfafonte) and Sarah (Stevens). The film and score conclude with a lengthy foot chase throughout the city in which Rozsa captures a cathartic transformation from darkness to light.

FSM's premiere CD features Rózsa's complete underscore to The World, the Flesh and the Devil in excellent stereo sound, including alternate and unused cues. The CD includes Rózsa's piano source music ("Nocturne") from late in the film, but not the Harry Belafonte songs (for contractual reasons) with which Rózsa had no involvement.