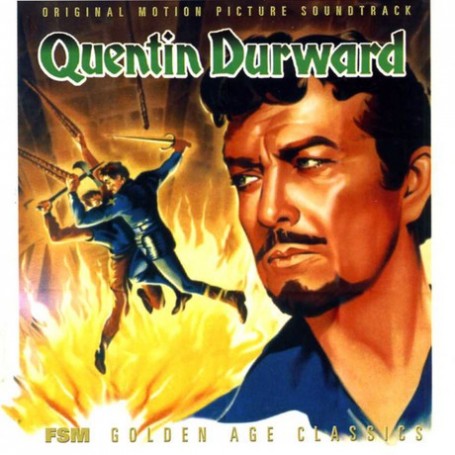 Quentin Durward (1955) was the last in an unofficial trilogy of historical adventures produced by M-G-M's Pandro S. Berman, directed by Richard Thorpe, and starring Robert Taylor. Ivanhoe (1952) and Knights of the Round Table (1953, FSMCD Vol. 6, No. 7) had been scored by Miklos Rozsa, but during the middle of 1955 Rozsa was occupied with the studio's Diane (FSMCD Vol. 7, No. 3), so the new picture was taken on by Bronislau Kaper.

Like Ivanhoe, Quentin Durward was based on a historical novel by Sir Walter Scott, but took on a comic dimension as it depicted a 15th century "when knighthood was a drooping blossom." Taylor starred as the title character, an honorable but penniless Scottish knight sent to France on a minor mission that grows into a battle for the country's future. The film featured lovely European photography, a mostly English supporting cast, and a charming turn by Taylor as the chivalrous but somewhat hapless knight.

Bronislau Kaper's score for Quentin Durward is a delightful swashbuckling effort in the best tradition of Erich Wolfgang Korngold's '30s and '40s efforts and the CinemaScope-era scores by Waxman, Rozsa and Steiner. The themes range from a lighthearted Scottish jig to a yearning love theme, and melancholy strains of unrequited affection—with solidly symphonic action music for the derring-do. The score has long been desired by fans of the genre.