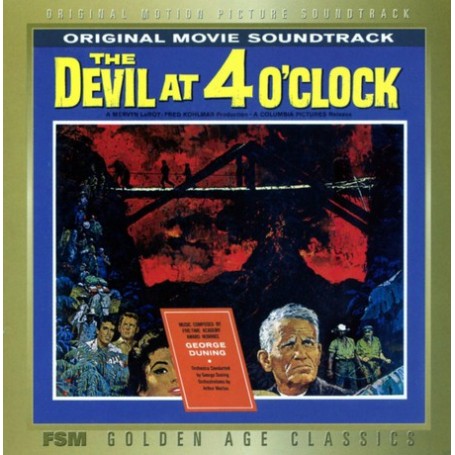 THE DEVIL AT 4 O'CLOCK / THE VICTORS

This CD features two soundtrack LPs from the Colpix Records catalog: The Devil at 4 O'Clock (1961) and The Victors (1963). Colpix Records (1958-1966) was set up to release soundtracks from Columbia Pictures, but over time its catalog has changed hands; it is today controlled by Rhino Entertainment Company, who have licensed these albums to FSM. The LPs could not be expanded, but each makes its CD debut here—at a special lower price.

The Devil at 4 O'Clock starred Spencer Tracy and Frank Sinatra in an early "disaster" movie involving a volcano annihilating a South Pacific island. The excellent score by George Duning (Picnic, Toys in the Attic), one of his last for Columbia Pictures, features engaging melodies and action sequences—a solid symphonic score that is highly enjoyable. Duning was a gifted melodist and The Devil at 4 O'Clock includes one of his quintessential love themes.

The Victors was an unusual "message" film written, directed and produced by Carl Foreman. The film follows a group of American troops (including George Hamilton, George Peppard and Eli Wallach) during World War II and shows how they are devastated by the conflict—albeit largely in peacetime, not combat. The unorthodox score by Sol Kaplan is used to melancholy, ironic effect in the picture, often as source music. It is symphonic but with a "pop" flavor, like newsreel and radio music drifting in from the past.

Part of the justification for pairing these two soundtracks—besides licensing exigencies—is that George Duning and Sol Kaplan later contributed music to the original Star Trek series. The Devil at 4 O'Clock sounds exactly like a feature-film version of Duning's Trek scores, while The Victors sounds almost nothing like Kaplan's Trek music.

These two Colpix LPs are presented in stereo sound, remastered from the 1/4" album tapes. A Frank Sinatra performance of "Have Yourself a Merry Little Christmas" from The Victors (unrelated to Kaplan's score) has been omitted due to licensing restrictions; it can be heard on an existing Sinatra CD. The booklet includes liner notes from past LP editions plus new commentary by Jeff Bond and Lukas Kendall.

The Devil at 4 O'Clock