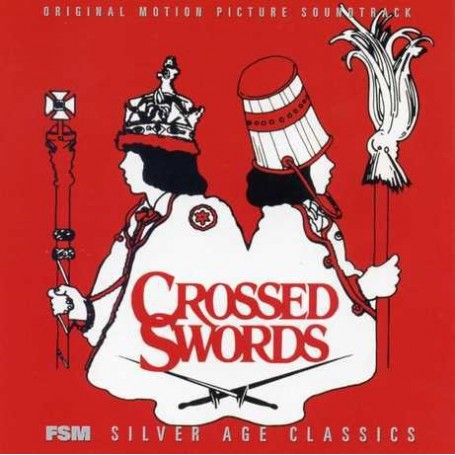 Crossed Swords was a 1978 film adaptation of Mark Twain's The Prince and the Pauper by international film producers Ilya and Alexander Salkind, directed by Richard Fleischer and starring Oliver Reed, Raquel Welch, Mark Lester and an all-star cast. A lighthearted tale of mistaken identity and swashbuckling derring-do, Crossed Swords (which was known by its literary title overseas) was the Salkinds' follow-up to their successful The Three Musketeers and The Four Musketeers, and it featured the duo's usual collection of highly priced talent both in front of and behind the camera.

For music, this meant Maurice Jarre, composer of Lawrence of Arabia and Doctor Zhivago. By 1978 John Williams had revitalized the symphonic film score with Star Wars and composers such as Jarre were given full license to apply their talents on appropriate projects. Jarre responded on Crossed Swords with a delightfully melodic, heroic and full-blooded orchestral score the likes of which used to flow from the pen of Erich Wolfgang Korngold and Max Steiner—here modernized by Jarre's inimitible melodic style.

Crossed Swords is a delightful symphonic score with multiple character themes. This CD features the soundtrack LP as released by Warner Bros. Records in 1978 (which was all that was available for license). The album runs a generous 40:16 and sequences the score's major themes and setpieces for optimal listening presentation, in fine stereo sound as performed by The National Philharmonic Orchestra.

Crossed Swords was one of several projects for which Jarre utilized Christopher Palmer as his assistant, and the score has the gargantuan symphonic sound of Tai-Pan, Enemy Mine (the orchestral portions) and Mad Max Beyond Thunderdome. It is a splendid swashbuckling work making its CD premiere at a special lower price.