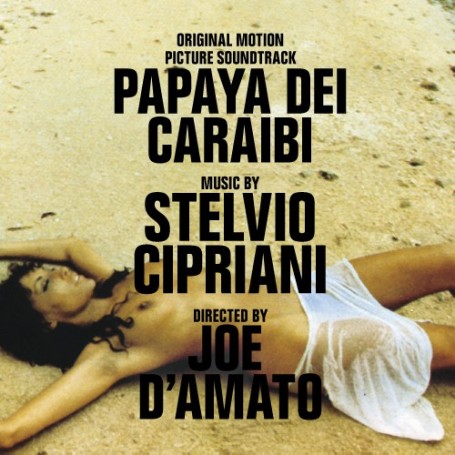 Frequently when a soundtrack gets a re-release collectors will assume they are already familiar with the score, however it is conceivable that this production will easily defy such an expectation! Stelvio Cipriani's PAPAYA DEI CARAIBI (PAPAYA: LOVE GODDESS OF THE CANNIBALS) was released in 1978 as part of a three-score LP by BEAT Records. This album, although popular and at the time not rare, only offered four cuts of PAPAYA. Connoisseurs will be delighted by the full extent of this fine effort as all 23 tracks are dynamic and satisfying. Cipriani obviously warmly gravitated to the tropical mise en scene and delivered a fascinating tapestry of potent ideas. Avoiding cliché at every turn the composer plays with exotic textures and color in such a way so as to fully engage and tantalize throughout – no missteps here. This disc unfolds as a jazz/rock/blues influenced "Caribbean concerto" and succeeds in painting a portrait in the listener's mind, a multi-faceted inner vision that allows one to vibrantly sense the film without even having seen it! The CD could lead to a reevaluation of the PAPAYA score, prompting its status being elevated to that of a minor masterwork. The disc comes with high-end packaging and graphics, including color photographs, plus collectors will find four bonus cuts of music not used in the film. Liner notes are by retro Euro-cult specialist John Bender.