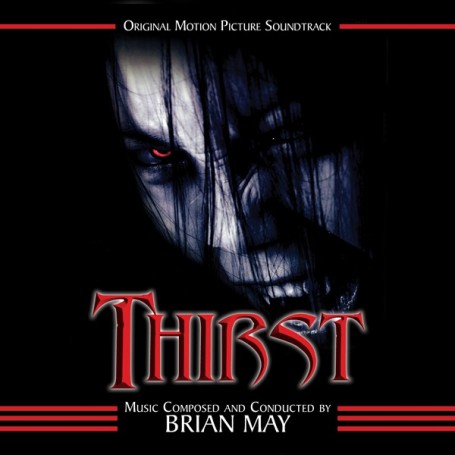 Dragon’s Domain Records, to be distributed through buysoundtrax.com, presents the soundtrack release of THIRST, featuring music composed by Brian May (MAD MAX, ROAD GAMES, THE ROAD WARRIOR, CLOAK & DAGGER) for the 1979 horror film directed by Rod Hardy (20,000 LEAGUES UNDER THE SEA, BUFFALO GIRLS), written by John Pinkney, produced by Antony I. Ginnane, starring Chantal Contouri, Shirley Cameron, Max Phipps, Henry Silva, David Hemmings and Rod Mullinar.
THIRST tells the story of Kate Davis (Contouri) who is kidnapped and taken to a strange corporate/industrial complex where vampires are trained, cared for, and fed through an elaborate blood farm which systematically draws blood from unconscious  people. Unlike the traditionally fanged menaces of the cinema, the vampires in THIRST do not have teeth that grow. They have metal devices they put in their mouths in preparation for their feeding. Upon her arrival, Kate is told she is a descendant of the infamous vampire countess, Elizabeth Bathory, and is expected to welcome her transformation as an initiate into The Brotherhood. As the story unfolds and Kate learns more about The Brotherhood, she struggles to resist against the temptation to give in and join them in their rituals.
To score the film, producer Antony I. Ginnane and director Rod Hardy were looking for someone who could provide a combination of the traditional symphonic score with a bit of a Gothic choir. Writer and director Richard Franklin, a longtime friend of the producer, recommended Brian May after using him on his first feature, THE TRUE STORY OF ESKIMO NELL.  May became Ginnane’s first choice of composer for his thrillers, scoring seven of them from 1978’s PATRICK through 1982’s TURKEY SHOOT (aka ESCAPE 2000).
Brian May’s music for THIRST is comprised of three elements. First there is a thematic main theme, a lovely recurring melody that is associated with Kate and her experiences through the storyline. Secondly, the suspense music, which is often derived out of the main theme’s introductory phrase, which lends a creepy atmosphere  and drives the panic and horror of the film. Finally, there is the harmonic choral music heightening the suspense as Kate becomes more inescapably immersed into the world of The Brotherhood.
Born in Adelaide in 1934, Brian May (no relation to Brian Harold May of Queen) was one of the first composers to achieve international acclaim as an Australian composer and was best known as the composer of MAD MAX and THE ROAD WARRIOR (MAD MAX II). May received his musical training as a pianist, violinist and conductor at the Adelaide Elder Conservatorium. He joined the Australia Broadcasting Company in 1957, where he formed the ABC Adelaide Big Band, an ensemble that performed all manner of light music for broadcast, and May became a leading figure in Australian light music as a result.  He moved to Melbourne in 1970 to arrange and conduct the ABC’s Melbourne Show band. Moving into film music in a period of time when Australia’s film industry was just beginning to take its place among international film circles, May composed such notable film scores as RACE FOR THE YANKEE ZEPHYR, ROAD GAMES, CLOAK AND DAGGER, DEATH BEFORE DISHONOR, MISSING IN ACTION 2, SKY PIRATES, STEEL DAWN, DR. GIGGLES, FREDDY’S DEAD: THE FINAL NIGHT MARE and BLINDSIDE. He won the Australian Film Institute Award for best original score with MAD MAX; many other awards followed, including the Golden Award from the Australian Performing Rights Association. He continued to score films until 1993, composing music for more than 30 films and many hours of television, most of which he orchestrated himself. Sadly, the composer passed away in 1997 at the age of 63.
Previously released on compact disc by 1M1 Records in the early 1990s, Dragon’s Domain Records is excited to bring THIRST screaming back from the past, newly remastered by Digital Outland, including a special bonus track, a specially prepared suite for THIRST, giving the chorale chant an excellent workout and a provocative listening experience. The booklet includes exclusive liner notes written by author Randall Larson, with the participation of producer Antony I. Ginnane.