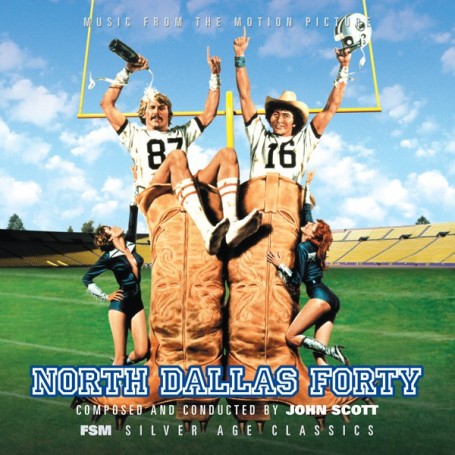 North Dallas Forty (1979) was a critically and commercially successful adaptation of Peter Gent’s 1973 novel which chronicled—in thinly fictionalized form—the five seasons the author spent playing for the National Football League. Mixing the potent thrills of the gridiron with a flavorful, occasionally harrowing, depiction of what happens in the hours and days surrounding “the big game,” North Dallas Forty is a highlight in the annals of sports movies.

British composer John Scott renewed his association with director Ted Kotcheff to provide a terrific score for North Dallas Forty, balancing personal, intimate music with dramatic sports energy. The music draws on the composer’s jazz background (as a prominent session player in the ‘60s) but grounds it in a classical approach. The main theme is a flexible, bluesy melody which is tender and mellow when it accompanies the movie’s more emotional moments, and haunting and eerie as it underscores the physical and emotional damage incurred by the players. By contrast, some of the football scenes feature a type of tuneful, disco-orchestral fusion (common to sports broadcasting of the era), while others underscore the violence, drama, celebration and heartbreak of the sport.

The 20-page booklet includes a personal reminiscence from composer Scott plus informative notes about the film and score by Andy Dursin (incorporating further quotes from Scott). Numerous film stills and the customary track-by-track analysis of each cue complete the package.