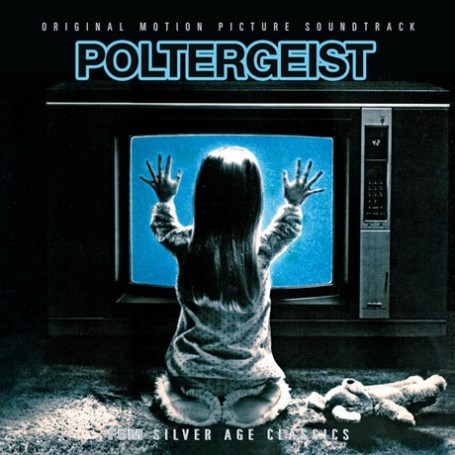 Jerry Goldsmith was at the peak of his phenomenal powers when he scored Poltergeist, Steven Spielberg’s 1982 film about paranormal activity. With this 2CD set, FSM presents the definitive edition of one of Goldsmith’s finest and most popular works—including the complete film score on Disc 1 and the original LP soundtrack album (along with a few previously unreleased bonus cues and alternates) on Disc 2.

Poltergeist was produced by Spielberg and directed by Tobe Hooper (The Texas Chainsaw Massacre). Set in a fictional Southern California development, it tells the harrowing tale of a typical suburban family whose home is invaded by demonic spirits. It blends elements from previous Spielberg films in a new mix that is part sci-fi, part horror, and part contemporary thriller—all genres in which Jerry Goldsmith excelled.

Goldsmith’s score flows effortlessly between hard-core, dissonant modernism and some of the most lyrical, humanistic music he ever wrote. It is both a marvel of musical construction and a visceral listening experience. Composed over an uncharacteristically long period of fifteen weeks, the music for Poltergeist evokes both child-like simplicity and sheer terror. The complete presentation of the score on Disc 1 includes several passages that were not used in the film.

Mike Matessino restored Goldsmith’s Poltergeist score from the three-track stereo film mixes for this release; Bruce Botnick, the film's original recording supervisor, did the digital mastering. The deluxe 28-page booklet features an informative and perceptive essay on the film and score—incorporating remarks by the composer—and a complete cue-by-cue analysis by Matessino.

As a bonus, disc 2 also includes the re-recorded suite of cues (including one previously unreleased) from Goldsmith’s The Prize (1963). Originally recorded for MGM LP, four of these tracks were included on FSM’s CD of the complete score (FSMCD Vol. 5, No. 16), but all five have now been remixed for superior sound quality from newly-discovered ½” three-track masters.

The CD booklet also includes a personal reminiscence from Bruce Botnick about the 1982 Poltergeist recording sessions, as well as the original LP notes by Steven Spielberg. In the legendary producer’s words, “Jerry’s music conjures many classical impressions of ferocious drive and at the same time, cathedral beauty. So…let the imagination wander. Pleasant dreams.”

DISC ONE: The Film Score