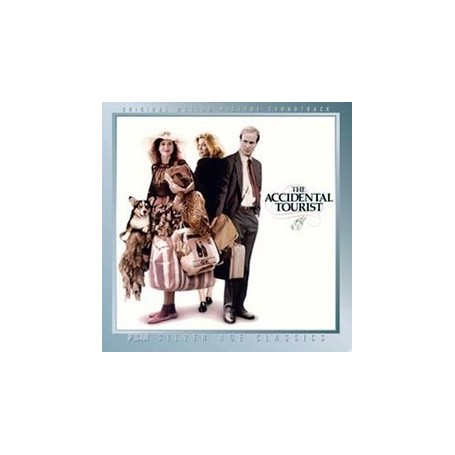 One of John Williams’s finest “intimate” scores is back in print on CD: The Accidental Tourist (1988), a straight reissue of the Warner Bros. Records LP and CD that now fetches high prices on ebay.

The Accidental Tourist was Lawrence Kasdan’s sensitive adaptation of Anne Tyler’s novel about a writer of travel guidebooks (William Hurt) who comes out of his rigid emotional shell (after the tragic death of his son) thanks to the love of a quirky dog trainer (Geena Davis, in an Oscar-winning role). Kathleen Turner plays Hurt’s estranged wife, with Bill Pullman, Ed Begley Jr. and Amy Wright among the supporting cast.

By 1988 John Williams’s name was practically synonymous with the modern-day Lucas/Spielberg blockbuster. However, Williams had provided excellent scores for films in a wide variety of genres, including intimate dramas such as the similarly themed Pete ‘n’ Tillie (1972). Any critic who marveled at Williams’s “sudden” mastery of understatement and subtlety in The Accidental Tourist was clearly an idiot.

Williams’s score for The Accidental Tourist relies on a single theme, albeit one comprised of three parts: an A theme for the main character (often played by piano), a syncopated B theme, and a four-note motive derived (often for French horns) from the opening phrase of the A theme. The orchestra is relatively small, with a subtle sheen of electronics to convey the emotional detachment of the main character. When the main character finally chooses to follow his heart, Williams’s musical catharsis is remarkable in its emotional flowering while remaining faithful to the understated approach of the picture.

The Accidental Tourist was one of the first John Williams soundtracks to appear on CD, and one of the last to be issued on vinyl. Both formats went out of print and the CD has become a high-priced collector’s item. FSM reissues the original album program (which was thoughtfully assembled for listening purposes and comprised almost all of the score), remastered from the original Warner Bros. Records tapes and chronicled with new liner notes by Williams authority Jeff Eldridge—including reel and part breakdowns of the component cues.