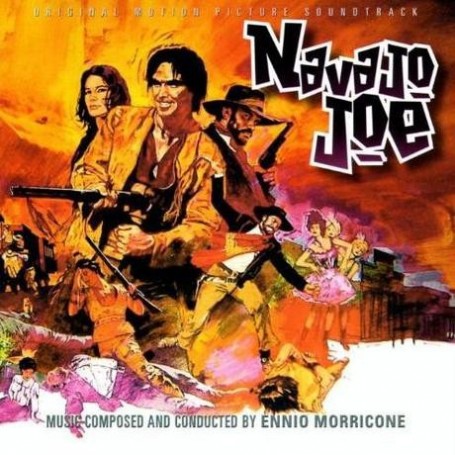 Ennio Morricone is beloved for his wholesale reinvention of the western film score, combining operatic melodies, Italian pop and bizarre instrumental innovations. Many of his scores for Sergio Leone's "spaghetti westerns" have become classics not just of the genre, but the whole of film music.

In all of Morricone's western scores, Navajo Joe (1966) stands out as the single most outrageous if not downright insane effort. Utilizing full orchestra and the choral group I Cantori Moderni di Alessandroni (The Modern Singers of Alessandroni)—with stunning soloist, Gianna Spagnulo (also heard on Guns for San Sebastian and Moses the Lawgiver)—Morricone crafted a main title based on the chorus blasting out "Navajo Joe" amidst shieking Indian cries. It has to be heard to be believed and is utterly catchy if not an occasion to stand up and proclaim love of life itself.

John Bender, writing in the liner notes to FSM's definitive new CD, puts it best: "This music was not drafted to slavishly trace a fictional narrative involving a character named Navajo Joe—the score is Navajo Joe."

The character of Joe is an Indian brave (Burt Reynolds) who slays dozens of bandits in order to obtain "a dollar a head" from white townsfolk needing protection. Subtlety is not the point of director Sergio Corbucci: the story is a model of a quick-moving, non-talky "B movie" plot, with copious action driven by the outstanding music. In addition to the "Navajo Joe" main theme, Morricone also provides a recurring piece of percussive action and a rapturous love theme for Joe's attachment to a half-breed maid (Nicoletta Machiavelli).

The Navajo Joe score has become legendary over the years, in part due to Morricone's credit (the pseudonym "Leo Nichols") and the scattered availability of the soundtrack. Three tracks were released in stereo on a Morricone compilation, and an LP was released in mono featuring a brief program of music. (The CD that appeared in the 1990s was mastered from vinyl sources in hideous sound quality.)

FSM's premiere, definitive CD compiles the complete Navajo Joe soundtrack from 1/4" master tapes for the best-possible fidelity. This includes the three stereo tracks, the additional monaural tracks from the LP, and previously unreleased cues also in monaural sound—sequenced in film order, with bonus tracks afterwards. It is the Navajo Joe CD for which fans have always dreamed.