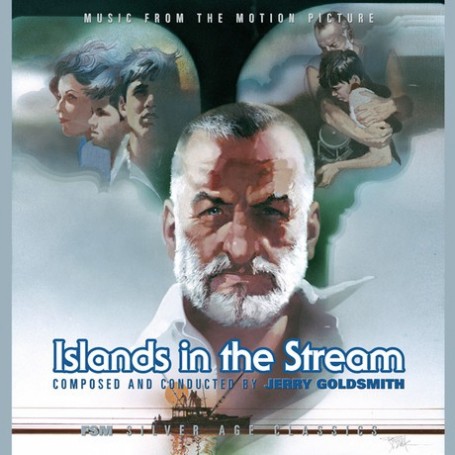 The work of Ernest Hemingway has inspired many great films and scores: Victor Young’s For Whom the Bell Tolls, Dimitri Tiomkin’s The Old Man and the Sea and Bernard Herrmann’s The Snows of Kilimanjaro—to name just a few. Now comes a more recent work by a titan of the Silver Age, Jerry Goldsmith, and it is one of the finest scores in his entire career: Islands in the Stream (1976).

Islands in the Stream starred George C. Scott as a Hemingway-like character living on a Caribbean island, and remains one of the most moving portraits of the Hemingway mystique put on screen. The semi-autobiographical novel (published posthumously in 1970) was directed for Paramount Pictures by Franklin Schaffner, perhaps Goldsmith’s most fruitful cinematic collaborator (Planet of the Apes, Patton, Papillon). The composer was enormously fond of the project and spoke of it often as the favorite score of all his work.

The score is based on a sublime main theme subjected to countless variations throughout the film, making it seem as universal and all-embracing as the sea itself. Secondary material runs the gamut from bits of Caribbean color to two powerful action sequences, but the musical highlight may be the 12-minute-long sequence, “The Marlin,” in which Goldsmith creates a virtual tone poem that gets to the heart of George C. Scott’s Hemingway-like main character and his moving relationship with his three sons.

Unreleased at the time of the film, the score was re-recorded by Goldsmith for Intrada Records in 1986 (during the scoring sessions in Hungary for Schaffner’s Lionheart); all previous CDs feature the 1986 re-recording. FSM’s CD premieres the original soundtrack as recorded for the film itself in 1976 on the Paramount Pictures scoring stage with a 64-piece orchestra. (The “boat chase” music not included on the Intrada recording makes its debut here.)

Bruce Kimmel of Kritzerland Records supplied his personal ¼' stereo tape copy for this CD of the original music masters (which are now apparently lost), made when he was hoping to release an album on the Varèse Sarabande label in the late 1970s. (Go here for a note from Bruce.) The recording has been lovingly mastered by Bruce Botnick, Goldsmith’s longtime engineer after they worked together on 1979’s Star Trek: The Motion Picture.

The booklet includes a brief note from Botnick, plus the usual in-depth FSM background essay and detailed track commentary by Jeff Bond and Alexander Kaplan. Islands in the Stream is Jerry Goldsmith at the very height of his powers—a classic of film scoring that, once heard, cannot be forgotten.