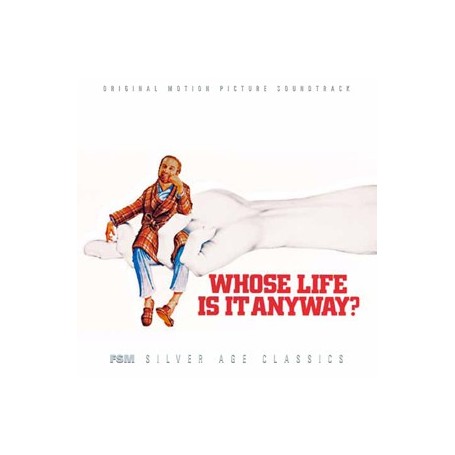 The collaboration between director John Badham and composer Arthur B. Rubinstein has yielded such excellent scores as Blue Thunder (1983), WarGames (1983), Stakeout (1987) and The Hard Way (1991). FSM proudly presents their first feature collaboration, Whose Life Is It Anyway? (1981), in which Rubinstein makes expert—and affecting—use of Baroque styles to elevate Badham's superior adaptation of the stage play by Brian Clark.

Whose Life Is It Anyway? stars Richard Dreyfuss as a dynamic artist, Ken Harrison, who is paralyzed in an auto accident. Feeling his life is over without the ability to pursue his art, he goes to court for the right to die. John Cassavetes, Christine Lahti and Janet Eilber costar in this acclaimed film adaptation.

Despite the stagebound origins—and potentially downbeat subject matter—Rubinstein wrote a lively symphonic score bristling with energy. “Because the film is about life, I knew the score must reflect that,” Rubinstein says in the CD liner notes. “The music starts upbeat and it ends upbeat. In my own sort of strange dissecting of what the film was about, it was clear to me that it was about the life force, and Ken’s life force was sculpting. The intellectual side of my pea brain led me to Baroque music—Bach. Bach is, for me, the essence of structure, architecture, sculpture. His music is the embodiment of the life force.”

The concept decided upon, Rubinstein crafted a unique sound palette (eliminating flutes, clarinets and violins) and wrote in a variety of classical forms—passacaglia, gavotte, bourée and many others. But his adherence to these styles never gets in way of the music’s essential feeling or its sensitive support of the movie’s expertly crafted drama. The film was Rubinstein’s first major feature (he had scored television and smaller films beforehand) and it is easy to see how he would become so successful in the field—the score is not only terrific in and of itself as music, but is carefully designed (theatrically, emotionally, intellectually) to support a thoughtfully intimate story.

This premiere release of the complete score to Whose Life Is It Anyway? is presented in excellent stereo sound, with liner notes by Jeff Bond and Alexander Kaplan incorporating new comments by Rubinstein, who has graciously assisted with the production.