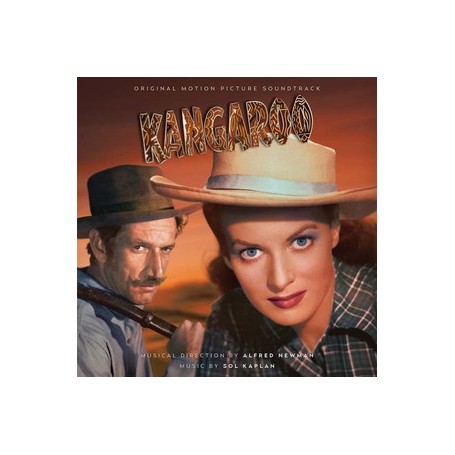 KANGAROO - THE AUSTRALIAN STORY (1952} is a tale of cattle ranching, con men and intrigue set in early 20th century Australia. Meant as the first in a possible series of films to be made in cooperation with the Australian government, 20th Century-Fox made big plans and had high hopes for the film. The film would be directed by Lewis Milestone, and would star Maureen O’Hara, Peter Lawford and Richard Boone. However, many changes to the script (mostly for the worse, according to O‘Hara), and extremely hot weather conditions turned the filming into a very unpleasant experience. The resulting film, although mildly entertaining and boasting a few standout scenes, was far from the hit Fox hoped it would be.

For this CD, thankfully, one of the film’s finest assets has been rescued from obscurity and its confinement within prints of this relatively forgotten film, and that is the score by Sol Kaplan. It is a wonder this score has not received more attention before now. It is truly a superb example of the kind of top-notch scoring that was going on at Fox in the ‘fifties. It’s got everything… suspense, mysterious intrigue, a suitably savage theme for a tribe of Aborigines, a sentimental theme (based on an old folk song) for Maureen O’Hara’s character, plus music of struggle and triumph. The CD also contains several cues that were partially or totally deleted from the film, including, in its entirety, the exciting The Holdup (in which Richard Boone’s character is bitten by a snake), and nearly half of The Stampede. This latter cue is an orchestral tour-de-force, an in-your-face assault that manages to keep you on the edge of your seat from its beginning until its eventual denouement, by constantly changing its orchestral focus and rhythms, often magnificently punctuating the music with aggressive percussion. It is certainly one of the finest pieces of sustained tension and action of Kaplan’s (or any other Hollywood composer’s) career.

Another thing this score has going for it is the musical direction by Alfred Newman. Through his conducting, he brings his usual heart to the performance, adding muscularity and precision to the action cues and an aching tenderness to the softer sections. He also brings along some of his own music. The finale reuses a portion of his score for The Keys of the Kingdom in a most exuberant and breathtaking fashion. When carefully listening to the score, it becomes apparent that he might have had a hand in the composition/arrangement of a few other cues too.

A nearly forgotten gem of a score, the CD was prepared from elements at Fox, some stereo, others mono. 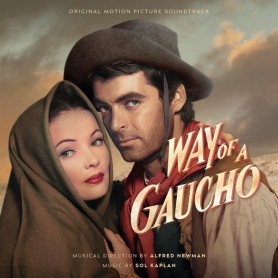 WAY OF A GAUCHO