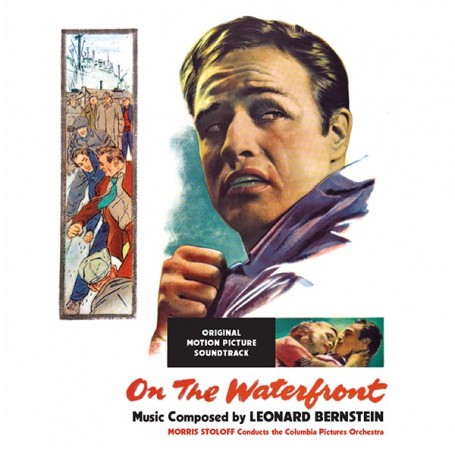 An important, world-class film score finally on CD for the first time ever! Leonard Bernstein's magnificent music for Elia Kazan's equally-magnificent, multi Oscar-winning film On The Waterfront - with its landmark performance by Marlon Brando - has until now been available only as an oft-perfomed, re-arranged 19-minute "classical" suite, a brief 2-minute selection on "Leonard Bernstein's New York" album with the Orchestra of St. Luke's plus one short segment on a 1956 Decca collection of Columbia movie themes entitled You Can't Run Away With It. The actual original soundtrack scoring session elements have been missing for ages and were presumed lost for ever. But, incredibly, when Sony unearthed elements for their recent restoration of the film classic on Blu-ray, myriad cans of audio turned out to contain not just effects and film dialog but also the entire scoring sessions, probably being discovered for the first time in a half century. These recordings, captured on acetate discs for playback purposes during the sessions, included music not heard in the finished film! Recorded at Columbia Pictures' own scoring stage at the end of April 1954, with vintage audio and surface noise in abundance, these none-the-less priceless recordings at last reveal the entire score in all of its magnificence. While some nominal restoration was necessarily performed during mastering, Intrada took pains to retain the integrity of the original recordings, avoiding attempts to engage excessive noise reduction (which would damage the upper range, string sonorities and harmonics) or otherwise sonically compromise this important piece of musical history. Several authors have written about Bernstein's lone original film score, including text by the composer himself. The architecture is worthy of the great symphonies, the harmonic vernacular still profound today. The potent violence music, the dramatic ideas, the memorable love theme and all their collective variants are here, including the actual soundtrack performance of the music for the legendary "cab" scene which Bernstein completely dropped from his concert suite. Deserving particular spotlighting is the main theme and how it appears: In an incredibly stark and unusual beginning device, one French horn plays the theme without introduction, without accompaniment. Soon woodwinds, then straight-mute trumpets enter. It's subtle and profound. Then the melody disappears for nearly the entire score (!), finally emerging on a single trumpet late during "Dead Pigeons", prior to the final fight scene. Equally profound, subtle scoring. Then, for his actual finish, Bernstein goes to the other extreme, bringing the entire orchestra into a triumphant, fortissimo climax on the theme worthy of Brando's famous "walk", massive chords pounding, multiple tympani, tam tam & gong crashing. Note also a solo trumpet crying out alone with the love theme high above the rest of the orchestra which instead shouts out the main theme in powerhouse fashion. A brilliant melding of two memorable melodies into one! Film music doesn't get any better than this. As "extras", our CD also offers a rejected take of the main title with trumpets using cup mutes (a warmer sound) as well as the premiere of "The Accident" that was also dropped from the picture. Yet another treat is hearing a surging, powerful full strings treatment of the main theme following the aforementioned "Dead Pigeons" quote. It too was completely dropped from the film but arranged into Bernstein's concert suite. Listeners who thought it was exclusive to the suite will be delirious to discover it's all here! Morris Stoloff conducts the Columbia Pictures Orchestra. Bernstein himself is one of the session pianists. Classic music from a classic film. Own this incomparable piece of American musical history at last!