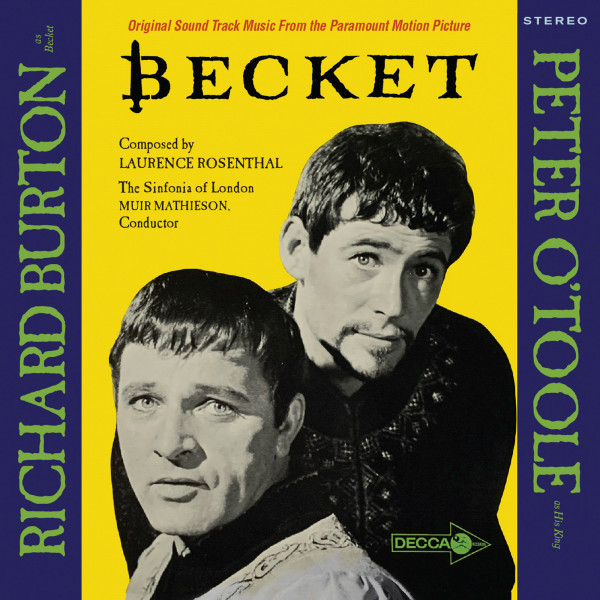 Laurence Rosenthal’s magnificent Academy Award-nominated soundtrack appears on CD! Epic historical drama chronicles the friendship/rivalry between Saxon bishop Thomas Becket and Henry II of England during the 12th century. Eleven additional Academy Award nominations were bestowed upon the powerful film, made by such prodigious talent as lead actors Richard Burton, Peter O’Toole, John Gielgud, screenwriter Edward Anhalt, producer Hal B. Wallis, cinematographer Geoffrey Unsworth, Editor Anne V. Coates… and composer Laurence Rosenthal. Paramount Pictures presented the film in 1964 to universal acclaim. Once boyhood friends, Thomas and Henry find themselves on opposing sides of a power struggle in various affairs  between church and state. Composer Rosenthal captures the gamut of historical drama and power, ranging from the playful and colorful adventures of youth through love, conflict, hate, trials and penance. It is incredible array of material to work with and Rosenthal gets inside all of it. Opening with his dramatic main title for full orchestra and male chorus, Rosenthal quickly has trumpets declare his primary 3-note motif based on the interval of a 2nd in forte fashion, announcing the incredible drama about to unfold. As the dynamic piece progresses, Rosenthal brings in massive full orchestra major chords, fanfares and finally an extended misterioso section. Late in this section of the lengthy sequence, Rosenthal introduces another 3-note motif, this one characterized by wider intervals, ultimately becoming the main Becket theme. Energetic music for bawdy play and hunting next gets a say. In another lengthy cue, Rosenthal offers “Gwendolyn”, a haunting piece given distinction by melding period-sounding melodic ideas with the composer’s signature use of modernistic 2nds and major 7ths in the harmonic vernacular. Beautiful and striking! Another highlight: King Henry’s “Triumph in France” is given a spectacular processional that would make William Walton proud. For all the great moments of this score, one must shine the spotlight on how Rosenthal brings everything to a conclusion: Following the violent slaying of Becket, Henry does penance for his friend’s death, then makes his exit. Rosenthal follows the scene with a building, harmonious statement of the main Becket theme for horns, followed by trumpets. The orchestra crescendos and Rosenthal commands with three massive descending fortissimo major chords - an incredibly powerful sonority - landing on his initial 3-note motif in a powerhouse coda, arguably the composer’s most powerful finale ever. While the original album master itself has been lost, UMG was able to provide Intrada with a pristine condition tape copy of the composer’s generous 40-minute stereo album program. Booklet features the original 1964 Decca cover artwork. Score recorded at Shepperton Studios in England, orchestrations by the composer, played by the Sinfonia of London. Muir Mathieson conducts, Laurence Rosenthal composes. Intrada Special Collection CD available while quantities and interest remain! 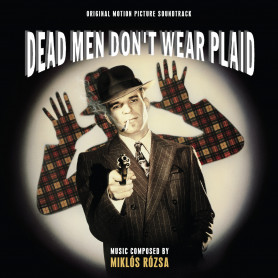