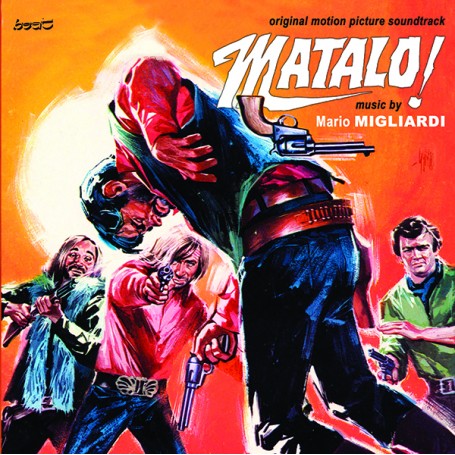 Beat Records is happy to present on CD the original score by Mario Migliardi for the western ''Matalo!'' directed by Cesare Canevari in 1970 and starring Lou Castel, Corrado Pani, Antonio Salines, Luis Dávila, Claudia Gravi, Miguel Del Castillo, Anna Maria Noé, Ana María Mendoza, Mirella Pamphili, Bruno Boschetti. For the soundtrack of "Matalo!," director Canevari decided to call a composer he had never worked with: Mario Migliardi. Thus, after Ferrio, Gian Piero Reverberi (for "Una jena in cassaforte") and Armando Sciascia ("Per un dollaro a Tucson si muore"), the director begins a new collaboration with a composer who had done a lot for television, but little for cinema, with the exception of Duccio Tessari's "La sfinge sorride prima di morire" and Mal's negligible musicarello "Pensiero d'amore." It could therefore have been a risk, a sensational flop, but instead it was a stroke of genius, because Migliardi not only accepted Canevari's challenge but also veered dramatically towards a crazy, brilliant and psychedelic soundtrack, definitely ahead of its time. Why? Because instead of fishing from the sound of spaghetti Westerns and known references, Migliardi - who was fifty years old at the time, not a kid - decided to take the rock and pop sounds in vogue at the end of the sixties, mixing Western and psychedelic, folk and electric guitars in a combination that still today - especially today - sounds incredibly modern. Exaggerated? No. Listen to the nine minutes of the main theme in your headphones: it practically sounds as if Jimi Hendrix launched into a jam session and Woodstock - staged a year earlier - suddenly became Weststock, kicking up dust, psychedelic sounds and crazy drums. The "Matalo!" soundtrack is a forgotten little (big) gem that absolutely must be rescued and reconsidered, even within the path of cinema composition of the period. After entering the Western, Canevari in fact returned to Reverberi for "Il romanzo di un giovane povero," shot four years later, while Migliardi would remain in the West with Klaus Kinski, first in "Prega il morto e ammazza il vivo" and then in "Il venditore di morte." In fact, however, his work on "Matalo!" was sort of a dead end that remains so today, a brilliant venture from which one could probably go back, a soundtrack that not only remains standing without the images it comments upon, but that seems almost like a concept album halfway between prog, rock and echoes of contemporary "modern," between John Cage and Terry Riley. Also, pay attention to the voice you hear on the album: it is that of Giano Ton (or Giacomo Tosti), the singer and producer who in the sixties had recorded several 45 rpms and who later would also produce the Scottish band Middle Of The Road.
Mastering by Claudio Fuiano, liner notes by Andrea Morandi, graphic layout by Daniele De Gemini