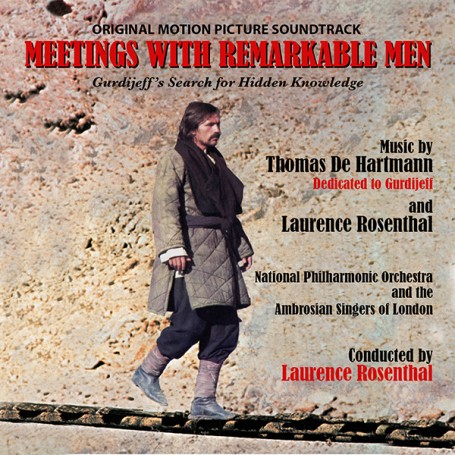 Released in 1979, MEETINGS WITH REMARKABLE MEN is an adaptation of part of the autobiography of the spiritual teacher George Gurdjieff, a mystic who lived between the second half of the 19th Century and the first half of the 20th Century. Filmed in the mountains and deserts of Afghanistan, the film details his search for the information that would serve as the base for the development of the Fourth Way To Enlightenment, following Gurdjieff as he grows up and leaves his home on the way to his final destination at the monastery of the Sarmoung Brotherhood, high in the Asian mountains, where he supposedly obtained arcane knowledge for his great project. Gurdjieff learns self-expression through dancing and body movement, a technique he taught his followers many years later.

The music for the film features music written by Russian composer Thomas De Hartmann, adapted by the great Laurence Rosenthal, composer of many fine scores, including THE MIRACLE WORKER, BECKET, RETURN OF A MAN CALLED HORSE and THE ISLAND OF DR. MOREAU. Thomas De Hartmann was a student of Gurdjieff himself from 1917 to 1929, passing away in 1956 at age 70.

Thomas De Hartmann was born in Khoruzhivka, Poltava Governorate, Russian Empire, now Sumy Oblast, Ukraine. At the age of 18 he received his diploma from the Saint Petersburg Conservatory. He studied conducting in Munich with Felix Mottl before World War I. De Hartmann was a graduate of the Imperial Conservatory of Music. He studied musical composition with three of the greatest Russian composers of the 19th century: Nikolai Rimsky-Korsakov, Anton Arensky and Sergei Taneyev. His piano teacher was Anna Yesipova, the second wife and former student of Theodor Leschetizky. Most of De Hartmann's compositions were for voice and piano. The Tsar was so impressed that he himself granted De Hartmann exemption from military duty so that he might study conducting in Munich.

In Munich, Thomas de Hartmann met the artist, former Sufi student and later stage impresario, Alexander de Salzmann; they were both friends of Rainer Maria Rilke and Wassily Kandinsky. Later, in Russia, after the beginning of World War I, De Hartmann would introduce De Salzmann to George Gurdjieff. De Hartmann transcribed and co-wrote much of the music that Gurdjieff collected and used for his exercises.

Composer Laurence Rosenthal was born in Detroit, Michigan. He studied piano and composition at the Eastman School of Music and later with Nadia Boulanger in Paris. His symphonic compositions have been premiered by Leonard Bernstein with the New York Philharmonic, among others. He has composed extensively for films and television. He has been nominated for two Oscars. He has won seven Emmys for miniseries, including PETER THE GREAT and ANASTASIA: THE MYSTERY OF ANNA, as well as for episodes of George Lucas's THE YOUNG INDIANA JONES CHRONICLES.

Originally released on vinyl at the time of the film’s release and later on compact disc by Citadel Records over 20 years ago, Dragon’s Domain Records is excited to bring MEETINGS WITH REMARKABLE MEN back to the marketplace, newly remastered by James Nelson at Digital Outland. MEETINGS WITH REMARKABLE MEN features music composed by Thomas De Hartmann and Laurence Rosenthal, performed by the National Philharmonic Orchestra, augmented by the Ambrosian Singers.