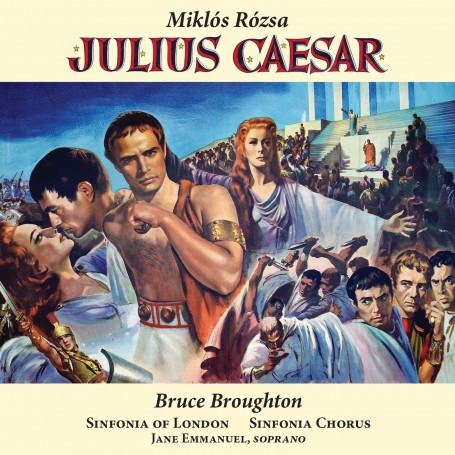 This CD release will only be available for 45 days and goes off sale October 15 2021 or when supplies run out.

Newly remastered presentation of our 1995 re-recording of Miklos Rozsa’s masterful score for Julius Caesar! Legendary Shakespeare telling of the events surrounding and following the assassination of the titular character saw production at MGM in 1953 under famed producer John Houseman, also-famed director Joseph L. Mankiewicz, with an equally famous cast that boasted Marlon Brando (Academy Award-nominated for Best Actor) plus James Mason, John Gielgud, Louis Calhern, Edmond O’Brien, Greer Carson, Deborah Kerr. Film was nominated for the Best Picture Oscar as well. Though Caesar is the catalyst for an intense tale of murder, intrigue and Roman warfare, it remains the towering figures of Caesar’s noble friend and Roman General, Mark Antony, in conflict with Caesar’s closest friend and eventual assassin, Brutus, that steers the drama. Miklos Rozsa anchored his potent score on these dual principals, offering not one but two primary themes that compliment and ultimately conflict with each other in an incredible final display. With his “Julius Caesar Overture”, Rozsa introduces Brutus with a rich, somber minor key theme for strings, while Roman fanfares accentuate. It’s a dark-tinged and brooding line that portends tragedy. Now enter Rozsa’s “Praeludium” heard underneath the opening credits, and Brutus gives way to the regal and martial Caesar theme, later to skillfully emerge Antony’s theme as he becomes Caesar’s avenger. How these two themes play independently for most of the score encompasses much of the 55-minutes of music. One superb highlight can be heard with the lengthy “Brutus’ Soliloquy”, in which his theme eschews all brass and unfolds with unusually thick, lugubrious writing for strings emphasizing the lower and middle registers. It surely qualifies as one of Rozsa’s great pieces! Other contrasting ideas appear as well, including numerous Roman fanfares, processions and dramatic sequences involving storms, battles and the murder itself. And then there is that incredible moment when both primary themes play, then collide… with one of them finally winning the conflict.: “Caesar, Now Be Still” finds Brutus the assassin’s army being destroyed by Antony the avenger’s army. Rozsa works with the former’s tragic theme as Caesar’s once-friend now need fall on his own sword. Emerging at first from a distance then inexorably taking command, Antony’s (Caesar’s) theme becomes a powerful Roman march, climaxing in a resplendent display of fortissimo brass and percussion. Wow! Rozsa’s complete score, including much music not used in the final film, was beautifully reconstructed by Daniel Robbins from Rozsa’s own manuscripts. Three brief alternates make their debut. Veteran composer/conductor Bruce Broughton leads the superb Sinfonia of London, augmented by the Sinfonia Chorus and soprano soloist Jane Emmanuel. Engineer Mike Ross-Trevor records and mixes at AIR Studios in London, Booklet notes by Tony Thomas, Douglass Fake with Douglass Fake producing. Completely remastered presentation available in limited quantitiy on CD with new packaging designed by Kay Marshall before moving on to live as a digital release only.