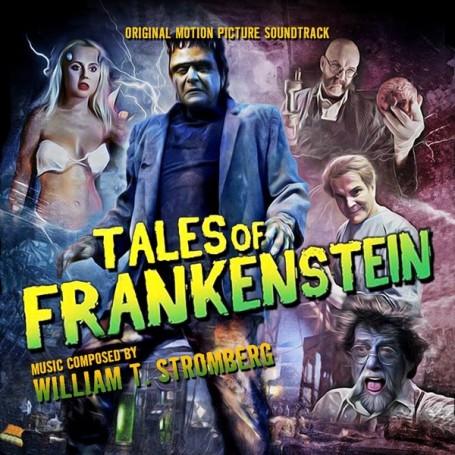 Released in 2018, TALES OF FRANKENSTEIN was an anthology movie along the lines of Amicus’ DR. TERROR’S HOUR OF HORRORS or George A. Romero’s CREEPSHOW, the movie presents four stories written by author and filmmaker Donald F. Glut and based on Mary Shelley’s classic Frankenstein creature. Each tale is set in a different era and location, and many of the character names are taken from classic Universal or Hammer monster movies or actors. TALES OF FRANKENSTEIN was an Indiegogo-funded low-budget classic with humorously horrifying storylines about maniacal mad scientists related to or following in the footsteps of the infamous Victor Frankenstein in stitching together new life out of carefully-acquired body parts. Glut’s movie features multiple menacing monsters, a bounty of beautiful women, and is brought to life through the music of a master of classic horror music, William T. Stromberg.

Best known as an orchestrator and conductor, Stromberg has been involved for many years in the restoration and recording of dozens of vintage monster movie scores from film music’s golden age of the 1930s and ‘40s, many in collaboration with reconstructionist John Morgan. In addition to rescuing classic scores from oblivion, Stromberg has collaborated with Morgan on scoring TRINITY AND BEYOND: THE ATOMIC BOMB MOVIE (1995), STARSHIP TROOPERS 2: HERO OF THE FEDERATION (2004), Larry Blamire’s THE LOST SKELETON RETURNS AGAIN (2009), the Revolutionary War documentary THE BATTLE OF BUNKER HILL (2009), and others.

As an anthology film, TALES OF FRANKENSTEIN gave Stromberg the opportunity to write four different scores for each of the film’s four stories. In addition there’s the modern-day wraparound story which centers on a portrait of Victor Frankenstein which is found by The Monster and which is on display in each of the four stories. While the four separate stories have their own unique scoring styles, Stromberg’s use of the portrait theme throughout kept the anthology format to a compatible musical continuum.

With TALES OF FRANKENSTEIN’s budget limitations, Stromberg could not record the score with an orchestra, but instead used modern digital samples to create his instrumental palette, save for the electric guitar his nephew played in the final episode. With his experience as an orchestrator and an orchestral conductor, he had an advantage when composing with digital orchestral samples because he understands how a real orchestra works.

William T. Stromberg has composed and conducted music for many films, including the documentary TRINITY AND BEYOND, STARSHIP TROOPERS 2, BUGS and ARMY OF THE DEAD for the Sci-Fi Channel. He has conducted and orchestrated regularly for many Hollywood composers such as Rolfe Kent, Joseph LoDuca, Elia Cmiral, and Marco Beltrami, including the scores for LEGALLY BLONDE, NURSE BETTY, THE TRIANGLE, THE MESSENGERS, and MIMIC. William has also composed and orchestrated music for Steven Spielberg's TINY TOON ADVENTURES and BATMAN THE ANIMATED SERIES. In the summer of 2001 he toured with the rock group YES for the YES Symphonic Tour across America, composing the overture for the show and conducting the orchestra onstage with the band.