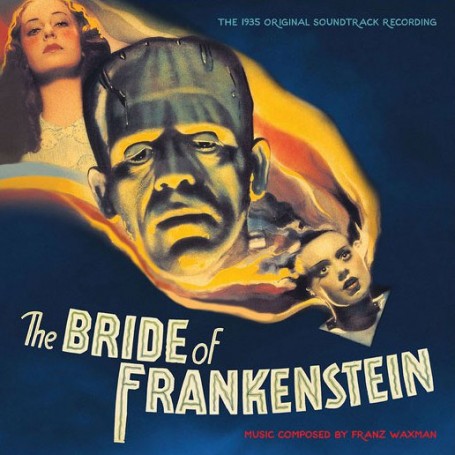 THE BRIDE OF FRANKENSTEIN

La-La Land Records and Universal Pictures proudly present our seventh title within the acclaimed Universal Pictures Film Music Heritage Collection -- the world premiere official release of the 1935 original soundtrack recording from the classic motion picture THE BRIDE OF FRANKENSTEIN, starring Boris Karloff and Elsa Lanchester, and directed by James Whale. Arguably unparalleled in its genre, BRIDE has and continues to enthrall generations with its cinematic power, a vital part of which is the film's astounding original music score by legendary composer Franz Waxman (REBECCA, SUNSET BLVD., SUSPICION, A PLACE IN THE SUN). This release, its premiere debut in any format, and a rarity for the score of its age, celebrates the Waxman legacy and recognizes the impact his BRIDE score has had in shaping the overall grammar of film scoring.

Sourced mainly from original acetates housed at the composer’s archives at Syracuse University and additional elements discovered by album producer Mike Matessino, this album presentation, meticulously restored and remastered by Matessino, brings an 84 year old classic score back to vivid life. While the entire score was not recovered, this 43 minute program is a fine representation of this classic work, and it retains the majority of the score’s most notable moments. The exclusive, in-depth liner notes by writer Frank K. DeWald include comments from album associate producer John Waxman, the composer’s son. The monsterously classic art design is by Dan Goldwasser. Limited to 3000 Units.