Ortolani may be best known internationally for his easy-listening and lounge-pop soundtracks whose gently lyrical scores were as popular in Europe as well as the USA, but in fact he was an articulate and versatile composer whose career since 1961 and its 225+ film scores spanned every genre. His provocative scores for poliziottesco (Italian police thriller) films were authentically drawn from big band and modern jazz traditions, and MAFIA JUNCTION is a thoroughly credible and entertaining score that catches all the right elements of the genre.

Serbian-born actor Ivan Rassimov plays American Narcotics officer Cliff Hoyst, who we soon learn is anything but an honest cop. Unlike most poliziottesco’s tough, above-the-law but morally upright cops, Cliff plays two sides against a third, intending to walk away a rich man when it’s all over. He’s supposedly gone undercover as an enforcer for a drug smuggling crime boss but his inclination to follow his own agenda readily answers the question posed in the film’s wordy Italian title: “Non c'è modo!” [“No way!”].

Riz Ortolani’s score saturates MAFIA JUNCTION with a persuasive, propulsive, and totally absorbing pop/jazz score that both defined the genre as well as the flashy, charismatic, self-confident character of Inspector Cliff. There is one primary theme that runs throughout the score, two minor themes that appear in association with subordinate characters or situations, and four standalone tracks associated with individual sequences but are not repeated.

This CD is the first release of Riz Ortolani’s MAFIA JUNCTION score in its entirety. Only two tracks have been issued previously and as a bonus track we’ve also included Ortolani’s full-length instrumental arrangement of the famously unattributed “Romance Anónimo” (Anonymous Romance), which is heard briefly in the film. The album is produced by Christian Riedrich and remastered by Stefan Betke. The CD is accompanied by a 12-page illustrated booklet designed by Aletta Heinsohn featuring detailed, exclusive notes on the film and its score by film music journalist Randall D. Larson, who deconstructs the score’s elements in detail.

All tracks previously unreleased
except * on Single CAM AMP 116 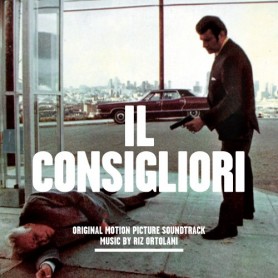