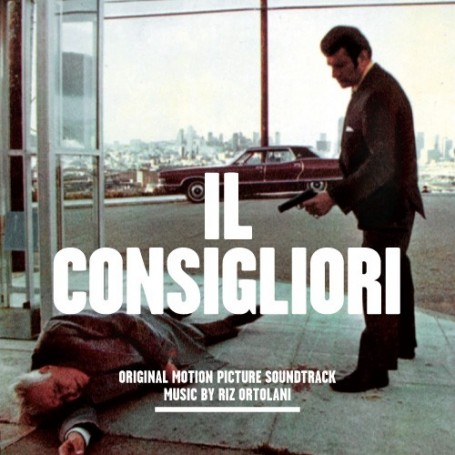 Riz Ortolani is not only one of the few remaining Maestro's of the silver age of film music in Italy, but he is acknowledged, much as with Ennio Morricone, as having procured solid international success. The composer is most famous for his multi-million dollar hit single More, from the exploitation documentary MONDO CANE (1962). The Grammy winning song has been recorded by just about every major vocalist of the 1960s and rivals John Barry's Born Free as an immortal standard drafted from a film score. Ortolani's 1973 assignment IL CONSIGLIORI aka COUNSELOR AT CRIME or THE COUNSELOR was made in direct response to the astounding success of Coppola's THE GODFATHER. The film, which was directed by Alberto DeMartino (THE ANTICHRIST), stars Martin Balsam (PSYCHO) and Tomas Milian (THE BIG GUNDOWN). Ortolani fortunately chose not to emulate Nino Rota's genius (except for one finely crafted theme) but instead relied on his own compositional voice. Because of this IL CONSIGLIORI is a deftly balanced mix of ostensibly disparate elements, and will satisfy all collectors who crave scores to be an exciting synthesis of styles and approach. Ortolani audaciously experiments with references to pop-cultural instrumental hits such as Deodato's redo of Also Sprach Zarathustra (of 2001 fame), and goes so far as to provide hints of (then) future soundtrack landmarks inclusive of Schifrin's MAGNUM FORCE. As with most of this artist's oeuvre there are also to be found heart-wrenchingly serene love themes and utterly bombastic brass explosions to represent violence, action and rage. The score has previously only been released as nine tracks on vinyl, while this latest Chris' Soundtrack Corner production generously gives fourteen restored cuts plus three bonus cues not used in the film. Liner notes are by Italian film score authority John Bender.