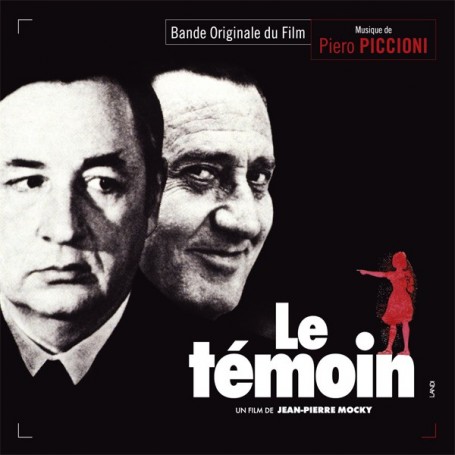 In 1978, Jean-Pierre Mocky directed Le Témoin, one of his most daring movies of his career. The film’s subject touches on the question of abolition of the death penalty, a burning topic during the end of the 1970s in France. The film tells the story of Robert Maurisson (Philippe Noiret), a banker and industrialist from Reims who brings his friend Antonio (Alberto Sordi) to restore the frescoe paintings in that city’s famous cathedral. Antonio’s model is a little girl who is later found strangled. The author of the crime is Maurisson, but little by little the suspicion falls on Antonio who will be finally condemned to death.

Le Témoin can be seen as a number of references to Italian comedy, principally through the character played by Sordi. The actor personifies the perfect petit-bourgeois type commonly found in Rome, simultaneously a whinge and a lech. But he will be finally deemed to have suffered a miscarriage of justice.
The director made his choice on Italian composer Piero Piccioni who worked almost exclusively for the cinema, writing original soundtracks for a very large number of films in which Alberto Sordi featured. He composed a very light score which accentuates the ambiguity of the film. This new remastered edition presents the two catchy main themes, originally issued on 45 RPM single by General Music France and their variations, which perfectly match for comic scenes and create unease in the darkest scenes.

The first theme (Le Témoin) appears principally in the form of a Gloria performed by a children’s choir accompanied by a church organ and mixes at times a rhythmic disco/pop with a religious choral, that is both joyous and somewhat sacrilegious, so typical of the spirit of Mocky himself. Some variations are simply performed on piano by the composer himself. The second theme (Le Faux Pas) perfectly personifies Antonio thanks to his Italianness and his naive cheerfulness sides. Piccioni shows his talent of orchestrator mixing brilliantly pizzicato strings, flute and sometimes a trumpet sometimes recalling Nino Rota's scores for Fellini.

In collaboration with EMI Music Publishing, Music Box Records presents this limited edition of 500 units, supervised and mastered by Claudio Fuiano. The package includes an 8-page booklet with liner notes by Nicolas Magenham, discussing the film and the score.