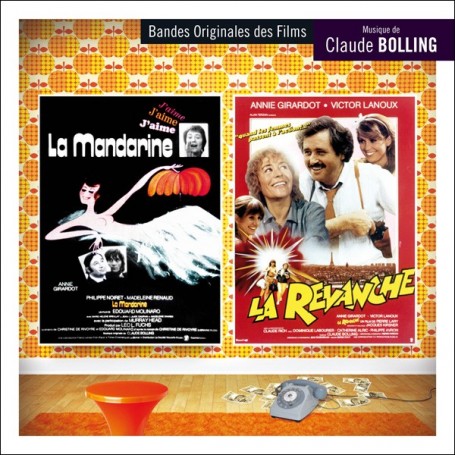 Based on the novel written by Christine de Rivoyre, La Mandarine takes place in the hôtel Boulard, in which the flighty owner, Mémé Boul (Madeleine Renaud), watches with tenderness over a tribe comprising her three grandchildren: Baba (Marie-Hélène Breillat), Alain (Jean-Claude Dauphin) and Séverine (Annie Girardot), married to Georges (Philippe Noiret), the couple who manage the establishment. Enter Tony, a young, wealthy English writer (Murray Head), a friend of Baba and Alain, who charms the three women of the clan.
Édouard Molinaro made his choice on Bolling who composed a very charming score. A happy coincidence as, in the process of filming the director had used a song by the French girl group Les Parisiennes entitled “Le temps du lumbago” performed by the female cast. The romance is presented through a beautifully lyrical love theme performed as a wordless song by Éliane Varon and its variations throughout the score. Some cues in the 1970's vibe is always present. This newly remastered version presents the same LP record program (released in 1972 on RCA Records).

La Revanche is about three women (Annie Girardot, Dominique Labourier and Catherine Alric) who decide for their own reasons to get revenge against a chauvinist society by organizing a hold-up. The tone is provided by a small jazz troupe (with top-notch jazz soloists) who deliver a light and jumpy theme dominated by flute, piano and trumpet. The flute is indeed an essential component of Bolling’s score. Five in number, they dialogue continually with the piano, the bugle and the trumpet to produce a series of sweet and gentle cues. Only one theme from La Revanche was before released on a CD compilation. Music Box Records releases now a complete edition including all the music written and recorded by Claude Bolling for the film.