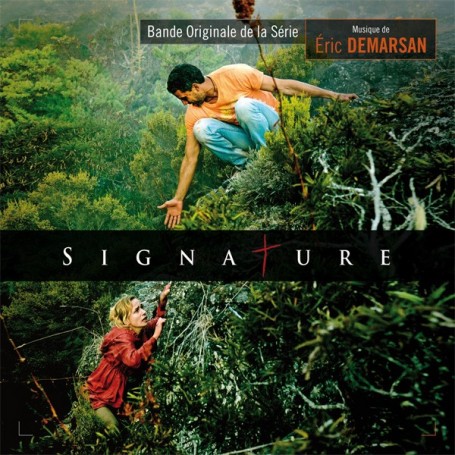 Broadcasted on French channel France 2 in 2011, the thriller TV series was created by screenwriter Marc Herpoux and director Hervé Hadmar starring Sami Bouajila, Sandrine Bonnaire, Sara Martins, Jan Hammenecker and Féodor Atkine.
The action takes place on the mysterious Reunion Island. Toman (Sami Bouajila), a former feral child, witnessed the murder of his parents in ''the lost valleys'' at the centre of the island. Today, Toman is now thirty-three. lliterate, he can’t stand violence against children. He kills those who do them harm. Toman buries his victims in his own personal graveyard: a cave hidden behind a waterfall, deep in the heart of the island. Daphné (Sandrine Bonnaire), a famous metropolitan reporter, came to the island to find a mysterious stranger and investigated the last victim of Toman...

Drawing inspiration from Morton Feldman, Toru Takemitsu or even Howard Shore, Éric Demarsan composed a very atmospherically rich and dark music. On the score for Signature, Hadmar said: “We discuss the orchestration with Éric. I talk of ''woodwinds'' and ''wind instruments''. So many avenues for various possible types of instrumentation. I talk about illiteracy and Toman’s social breakdown. To me, the music to accompany his dash through the forest in pursuit of his victims should betray this dissolution. We bring up Herrmann and Bartók both at the same time. Éric quickly comes up with the ''hunt motif'': a short harmony repeating three or four times in a decrescendo and reminiscent of an echo. The echo of the hunter’s internal radar. The echo of Toman’s gaze as he loses himself in the forest, in search of his prey. Toman generates from this a rough, unstructured musical piece... Thanks to the part of Daphné, the melody, even if not quite exuding happiness, allows some sunlight to be shed in the six episodes of the series. ”