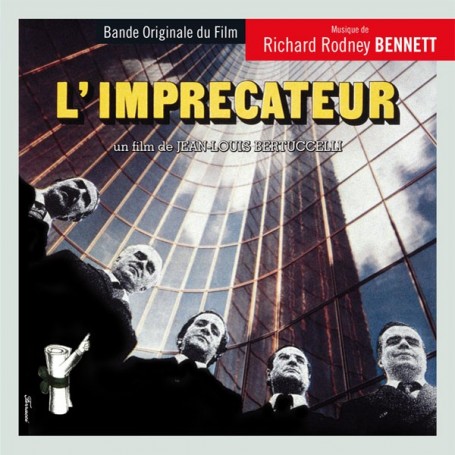 Adapted from the best-seller written by René-Victor Pilhes in 1974, L'Imprécateur is a sardonic comedy. After an executive is killed in a mysterious car accident, the French offices of his multinational company is inundated with mysteriously threatening be-ribboned anti-capitalist tracts, delivered overnight to everyone's desks. When Americans from the head office get wind of these developments, they institute a search for the perpetrator which leads to mysterious subterranean passages under the company's skyscraper.
Jean-Louis Bertuccelli, bringing L'Imprécateur to the big screen on 1977 meant displaying and disassembling the wheels that turn in a large multinational and the effect of its actions on the behaviour of its employees.
The director made his choice on Sir Richard Rodney Bennett and described to him the music that he wished to have for the film with the following words: “At dawn, the mist on the lake.”
The music, recorded in London under the direction of Marcus Dods, gives a certain craftsmanship to the film, conjuring up a mysterious and phantasmagoric air, as befits the spirits in the underground, as in the highest spheres. The only existing source was the hard-to-find LP record released by Barclay in 1977. Its presentation was only based on two long suites. This new release now presents the same suites but with separate cues in order to keep the listening pleasure intact.

In addition to L'Imprécateur, Music Box Records is pleased to present another Jean-Louis Bertuccelli's film Interdit aux moins de 13 ans, music composed by Gabriel Yared, one of his first ever scores for the cinema and never-before released.
The director lays a vision of the outskirts of Paris with neither embellishment nor aesthetic flair, in the pastel tones of a grey realism. Louis, a deliverer, works for a laundry company and is married with Marie, a saleswoman. He dreams of leaving and travelling. One day, he decides to stage a hold-up in a supermarket but the break-in goes wrong.
The keyboards and synthesizers are here in minimalist style, almost clinical, playing on the obsessive personality of the main character: repeating arpeggios, blues melodies, great ethereal cloths, between ambient and progressive rock.