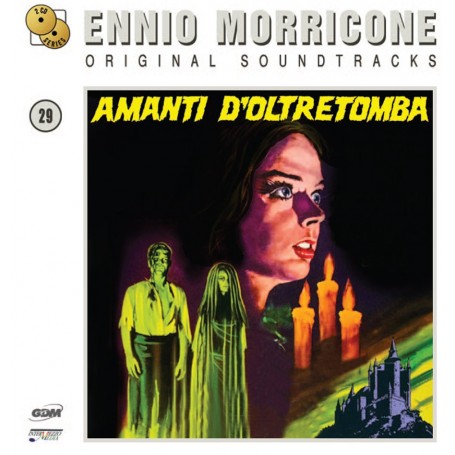 AMANTI D’OLTRETOMBA (Nightmare castle) 1965
Aka NIGHTMARE CASTLE, THE FACELESS MONSTER and NIGHT OF THE DOOMED (1965) A horror film directed by Mario Caiano (as Allen Grünewald) with stars Barbara Steele, Jenny Arrowsmith, Paul Miller and Helga Line in the leading roles. A sadistic count murdered his wife and her lover. Their ghosts return to take revenge. The movie was filmed atmospheric in black and white with a strong start, but unfortunately the dialogue is not good enough to keep your attention. Ennio Morricone wrote, orchestrated and conducted the score. The film starts with a strong theme on a church organ and it sets the mood for the film. Track 5 on the cd is called Per Organo e Ottoni (for organ and brass). The first track is called Amanti d’Oltretomba (part 1) is also the blueprint for the score L’AVVENTURIERO (1966, Terence Young). Track 3, Distesi,(more than 8 minutes), has partially been reused in the track Autumn – 1922 for the score NOVECENTO (1976, Bernardo Bertolucci) where the similarity starts after about 3 minutes. The orchestration for AMANTI D’OLTRETOMBA is much stronger and therefore even more intense. Track 4, Spettri, starts with a female voice not mentioned in the credits, but carefully listening to the voice it seems Edda Dell’Orso. The track continues with a cappella female voices but it is unknown who the other members of the chorus are… they could be I Cantori Moderni di Alessandroni. Track 6, Dall’Oltretomba, was originally composed for the film THE BIBLE (1965, John Huston) and was conducted by Franco Ferrara; The maestro reused it in this film of the same year, where it works perfectly. The soundtrack for AMANTI D’OLTRETOMBA was first released in its complete form on cd in 2006, but years earlier, in 1970, RCA issued noncommercial sonorization only on LPs, the rare SP series with some tracks from AMANTI D’OLTRE TOMBA.  These records were hard to find at the time… when internet was not yet operative. Now here you have again the remastered complete soundtrack, and a very interesting one, too.
Sijbold Tonkens

MILANO ODIA: LA POLIZIA NON PUÒ SPARARE (Almost human) 1974
Aka ALMOST HUMAN (1974) directed by Umberto Lenzi features as stars Tomas Milian, Henry Silva, Laura Belli and others. The story in short: Giulio Sacchi (Tomas Milian) is a psychotic violent who lives in  scumbags with no regard for human life, dedicating to torture and rape. He kidnaps the daughter of a very rich man to gain a lot of money.  The other side of the law is represented by Inspector Walter Grandi, played by Henry Silva who fights for making better the legal side.  This police thriller is one of Lenzi’s best films with a strong script and an interesting plot. Ennio Morricone has written also another  score for director, SPASMO realized in the same year. For MILANO ODIA he wrote Rapimento, a memorable haunting main theme for piano, flute and woodwind called “Rapimenti”.Another  interesting track is “Raptus Omicidia”. With a very original sound that was never invented by any composer before, just to demonstrate that Morricone is also a creator of sounds. The track starts with an orchestration that was later developed in 1977 for the film EXORCIST II, THE HERETIC (John Boorman). Sergio Marcotulli, the sound engineer  big collaborator of the maestro, is mentioned in the film opening credits. The music in the score gets on your nerves from time to time, but a trumpet and saxophone give  it a jazzy touch and  makes it an interesting score that serves the film in a perfect way. The uptempo theme  Milano Odia: La Polizia non può Sparare is in various versions on the cd and the solo instruments in combination with the orchestra conducted by Bruno Nicolai make it an unforgetable masterpiece. Since Morricone wrote only a few themes for this film, the tracks sound a bit repetitive. But the various orchestrations keep the music interesting.
Sijbold Tonkens