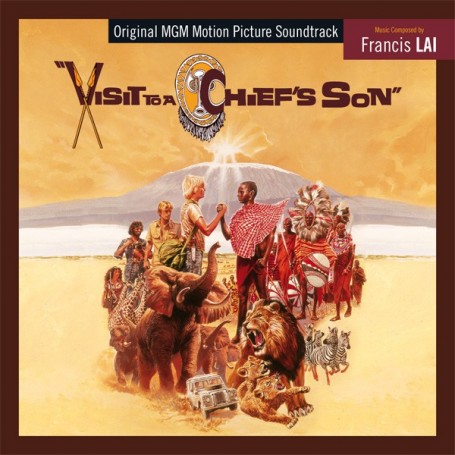 VISIT TO A CHIEF'S SON

Music Box Records is proud to announce for the first time available on CD the world premiere release of acclaimed composer Francis Lai's (Love Story, A Man and a Woman, Hannibal Brooks) score for Visit To A Chief’s Son (1974) which has been remixed in stereo from the original session masters courtesy of the MGM archives.

Visit To A Chief’s Son is a fragile, gentle and likeable story of what an African safari did to Robert (Richard Mulligan) a cold American anthropologist and Kevin (John Philip Hogdon) his somewhat selfish son. The scientist comes to East Africa ostensibly to photograph the 1973 solar eclipse, but in reality to shoot some secret Masai tribal rites. At the same time, his son gets his head together through friendship with young Codonyo (Jesse Kinaru) the son of Chief Lomoiro.

Produced in Kenya by former still photographer Robert Halmi from his novel, the film was directed by Lamont Johnson (The Last American Hero, Lipstick, One on One).

Visit To A Chief’s Son remains a movingly earnest, stereotype breaking and beautifully made film that stands as a widescreen discovery waiting to be made. Until then, this debut release of Francis Lai's score remains a testament to the composer’s ability to capture the most heartfelt of music through rich, thematic melody - an ability that remains as unchanged and vibrant as the Masai people themselves.
His creative passion resulted in a work of uncommon beauty and optimism, perhaps the brightest score at the time to grace a film about Africa. For instead of capturing a clichéd land of menacing tribal beats and roaring symphonic gestures, Francis Lai’s lush blend of an intimate orchestra, ethnic music and progressive pop-jazz rhythms convey an enlightened message of peace and brotherhood.