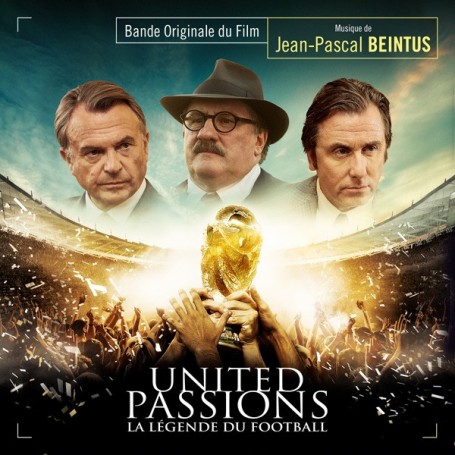 No reward points for this product.

The film:
A group of passionate European mavericks join forces on an ambitious project: the Fédération Internationale de Football Association (FIFA). An epic, untold story that brings to life the inspiring saga of the World cup and the three determined men who created it. Driven by their vision and passion, Jules Rimet, Joao Havelange and Sepp Blatter, overcame their doubts and fought obstacles and scandals to make the World Cup a reality. Spanning the tumultuous 20th Century, this timeless saga celebrates the game that, despite it all, became not just a worldwide sport, but an expression of hope, spirit, and unity...

The composer:
Born in Toulouse (France) in 1966, Jean-Pascal Beintus studied double bass, piano and composition in the conservatories of Nice, Paris and Lyon. In 1983, he joined the Orchestre de l’Opéra de Lyon (John Eliot Gardiner, Music Director) in the double bass section. Beintus used the orchestra as a source of inspiration to compose his first work, Samskara, for double bass and chamber orchestra, in 1996.

Beintus quickly built a reputation as a fluent and versatile composer and orchestrator, receiving numerous prestigious commissions. He has written music for nearly every type of ensemble, and for theatre, concert hall and film. The hallmarks of Beintus’ compositions are their rhythmic diversity, harmonic richness, and creative orchestrations.

Jean-Pascal Beintus' film work includes the original score of the Leonardo DiCaprio film The 11th Hour, as well as orchestrating Alexandre Desplat’s scores for Golden Globe-winning score of The Painted Veil and also The Queen, The Twilight Saga: New Moon and The Ghost Writer. Jean-Pascal Beintus continues his collaboration with French director Frédéric Auburtin by composing and orchestrating the score of United Passions. The film, starring Gérard Depardieu, Sam Neill and Tim Roth, has been selected to the 2014 Cannes Film Festival.