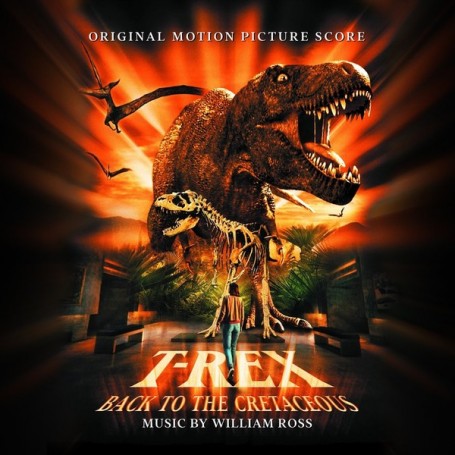 T-REX: BACK TO THE CRETACEOUS

Released in 1998, T-REX: BACK TO THE CRETACEOUS is an educational narrative IMAX film produced and co-written by Andrew Gellis and directed by Brett Leonard. T-REX: BACK TO THE CRETACEOUS tells the story of sixteen-year old Ally Hayden (Liz Stauber), the daughter of world-renown paleontologist Dr. Donald Hayden (Peter Horton). Ally is infatuated with dinosaurs and wants to prove to her father that she harbors some valid theories regarding parental behavior in Tyrannosaurus Rex. She begs her father to take her on his expeditions. Fearing the danger, he forbids her from tagging along. Ally reluctantly settles for leading tours of the natural history museum instead.

One night while Ally is visiting her father at the museum, she knocks over an oblong rock from her father’s desk. It cracks open on impact with the floor and emits a brown mist, transporting Ally back in time to the early twentieth-century and eventually to the Late Cretaceous (about 65–70 million years ago). While traveling backward through time she meets famed dinosaur painter Charles Knight, pioneering paleontologist Barnum Brown, and encounters several living dinosaur breeds: Hadrosaurus, Velociraptor, Pteranodon, Ornithomimus, and even Tyrannosaurus Rex!

One of the characteristics shared by a majority of IMAX films are their rousing orchestral scores, hellbent on seizing advantage of the robust audio systems installed throughout IMAX theaters. The lush romantic score for T-REX: BACK TO THE CRETACEOUS was composed by William Ross and is no exception. The gorgeous music for T-REX: BACK TO THE CRETACEOUS is the epitome of the grandiose IMAX film score. But for as beautiful, touching, and emotional as Ross’ score gets, there is also a dark side. The Late Cretaceous is a dangerous, mysterious, and merciless period and Ross paints its treacherous landscapes with aplomb.

William Ross is a prolific, award-winning composer and arranger whose work has spanned feature films, the recording industry and television. He has composed music for such films as TUCK EVERLASTING, MY DOG SKIP, TIN CUP, MY FELLOW AMERICANS, the IMAX film, YOUNG BLACK STALLION, HARRY POTTER & THE CHAMBER OF SECRETS, where he was adapting the musical themes of John Williams and, most recently, SEPTEMBER DAWN. Ross has orchestrated more than 100 films, including THE MATRIX RELOADED, FORREST GUMP, STUART LITTLE, THE MUMMY RETURNS, THE POLAR EXPRESS and VAN HELSING. He has also arranged for a remarkable list of artists including Barbra Streisand, Celine Dion, Josh Groban, Whitney Houston, Kenny G., Michael Jackson, David Foster, Quincy Jones and Babyface. In 2007, he was Music Director for the 79th, 83rd, 85th, and 86th Academy Awards shows. Arrangements penned by Ross have been a part of the opening ceremonies of several Super Bowls along with the opening and/or closing ceremonies of the Olympic Games in Calgary (1988), Atlanta (1996), Salt Lake City (2002), Torino (2006), Vancouver (2010), and Sochi (2014). Ross is also the recipient of four Emmy Awards, two BMI Film Music Awards, the Golden Score Award from ASMAC, and has been nominated for two Grammy Awards and an Annie Award.

Previously released on a rare compact disc, Dragon’s Domain Records is excited to bring T-REX: BACK TO THE CRETACEOUS back to the marketplace, newly remastered by James Nelson at Digital Outland. The booklet contains liner notes written by author and composer Brian Satterwhite.

T-REX: BACK TO THE CRETACEOUS is a limited edition release of 500 units.