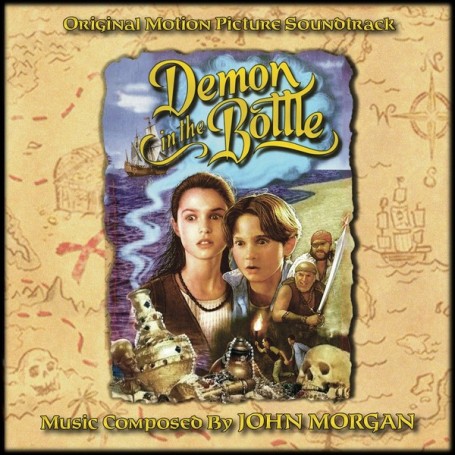 DEMON IN THE BOTTLE

Produced by Charles Band and Albert Band of Full Moon Features fame, DEMON IN THE BOTTLE tells the story of a group of four teenagers who accidentally find a lost treasure buried by an 18th Century pirate on a desert island in the catacombs beneath their hometown near the coast of Louisiana. The kids pry open the chest revealing a trove of gold coins, jewels, goblets, and an unusually-shaped bottle. Believing the bottle to contain a genie, one of them opens it and releases a hideous demon charged with guarding the treasure.

Three-time Academy Award® winner Randall William Cook is a revered special effects artist known for his stellar work on THE THING (1982), GHOSTBUSTERS (1984), FRIGHT NIGHT (1985), FROM EARTH TO THE MOON (1998), and THE LORD OF THE RINGS (2001-2003). DEMON IN THE BOTTLE was Cook’s directorial debut, a film in which he also served as a special effects artist. The overall design of the film’s demon is a nostalgic blend of Ray Harryhausen’s creature from 20 MILLION MILES TO EARTH (1957) and the Kraken from CLASH OF THE TITANS (1981).

Composer John Morgan was approached by his longtime friend Randall William Cook to compose the score for DEMON IN THE BOTTLE. The pair had known each other for years, but since Morgan was a composer and Cook a special effects artist, they had never had the opportunity to collaborate together on a project. After Morgan was officially hired by Cook to compose and record the score for DEMON IN THE BOTTLE, Morgan invited Stromberg to join him on the adventure. The challenge was to create orchestral adventure music in the vein of Bernard Herrmann’s scores for Ray Harryhausen films like THE 7TH VOYAGE OF SINBAd (1958) or JASON AND THE ARGONAUTS (1963) on a restricted budget that could barely afford to feed an orchestra for three days. Their outside-the-box solution was to contract an ensemble of fifteen to eighteen live musicians to record the woodwind, brass (sans trumpets), and harp parts of the score and employ synth or sampled instruments to record the strings, trumpets, and percussion.

John Morgan is best known as a leading reconstructionist of vintage film scores, in partnership with composer/conductor William T. Stromberg. With Morgan’s expertise in transcription and orchestration and Stromberg’s capability as a conductor, the pair have been involved in restoring significant film scores for new recordings, allowing rare historic and artistic film music in many genres to be recorded and released, many in complete form, for the first time. In 1979, Morgan composed and orchestrated his first feature film score and in the ensuing years composed music for more than 30 feature films, as well as many television, radio and cable projects including STARSHIP TROOPERS 2, TRINITY AND BEYOND, RAY HARRYHAUSEN – THE EARLY YEARS, CINERAMA ADVENTURE, TINY TOON ADVENTURES and others, many in collaboration with his music partner and life-long friend, William Stromberg.

Morgan's love and passion for the great scores of Hollywood's golden age led him to the arena of arranging and reconstructing many classic scores for new recordings. He embarked on a long series of film music recordings for Marco Polo (Naxos), BMG Classics and his own label with Anna Bonn and William Stromberg, TRIBUTE FILM CLASSICS. Among the scores he has reconstructed and orchestrated for new recordings are: Max Steiner's THE CHARGE OF THE LIGHT BRIGADE, KING KONG; Erich Wolfgang Korngold's CAPTAIN BLOOD, ESCAPE ME NEVER, THE ADVENTURES OF ROBIN HOOD, THE SEA HAWK; Roy Webb's scores for the Val Lewton films, Hans Salter and Frank Skinner's THE WOLF MAN, HOUSE OF FRANKENSTEIN, ABBOTT AND COSTELLO MEET FRANKENSTEIN as well as scores by Hugo Friedhofer and Victor Young.

Dragon’s Domain Records is excited to present the world premiere compact disc release of DEMON IN A BOTTLE, remastered and reconstructed from the composer’s own elements by James Nelson at Digital Outland with assistance from composer William Stromberg. The booklet includes exclusive liner notes written by author and composer Brian Satterwhite, with the participation of composers John Morgan and William Stromberg.

DEMON IN A BOTTLE is a limited edition release of 500 units.