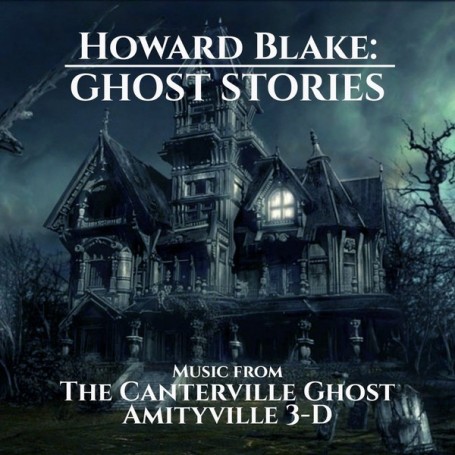 Dragon’s Domain Records presents HOWARD BLAKE: GHOST STORIES featuring music composed and conducted by Howard Blake for THE CANTERVILLE GHOST and AMITYVILLE 3-D, two films from his filmography that both have a common theme. Ghosts.

Based on the Oscar Wilde story, THE CANTERVILLE GHOST has been filmed several times. This particular version was a television film broadcast in 1986 and starring Sir John Gielgud as the eponymos ghost. THE CANTERVILLE GHOST has to do with an American family who inherit an old castle haunted by Sir Simon Of Canterville, the ghost of a dead English nobleman who was walled in and starved to death after killing his wife, Lady Eleanor, whose only memory is a bloodstain on the carpet which is impossible to clean up. Ayoung Alyssa Milano plays the young daughter who befriends the cranky ghost. Even though this was a made-for-TV movie, the composer treated it as if it were a feature film and used a classical 32-piece orchestra performed by The Sinfonia of London, conducted by the composer and subtly enhanced by synthesizer.

Released in 1983, AMITYVILLE 3-D tells a ghost story with a harder edge, as a reporter (Tony Roberts), moves into the notorious Long Island house to debunk a pair of phony spiritualists but then finds himself besieged by the evil manifestations which are connected to something sinister lurking in the basement. His estranged wife (Tess Harper) is against their daughter (Lori Loughlin) visiting the house but her friend Lisa (Meg Ryan, in one of her earliest roles) talks her into taking her for a tour, which causes havoc to stir within the haunted house. To score the film, producer Dino De Laurentiis recalled the exceptional work Blake had done for his FLASH GORDON film, even though much of his music had been replaced by Queen’s synths. De Laurentiis insisted that the assignment be given to Blake. His score for AMITYVILLE 3-D features a female vocalise with a piercing ghostly resonance, designed to build anxiety. While his score is presented primarily for acoustic orchestra, Blake added some subtle synth effects to augment some of these vocalise moments.

Howard David Blake was born in the London borough of Enfield in 1938. At the age of eighteen, he was awarded the Hastings Festival Scholarship and attended the Royal Academy of Music where he studied piano and composition. His interest in the cinema led him to a number of outside jobs and he worked as a projectionist at the National Film Theatre. Turning down a second scholarship from the British Film Institute, Blake instead became a piano session player, arranger and orchestrator at Abbey Road and other studios for several composers, including Stanley Myers, Quincy Jones and Bernard Herrmann. It was Herrmann who introduced Blake to Laurie Johnson, staff composer for THE AVENGERS, leading to his first television scoring assignment in 1967. His work in television and advertising music continued and his frequent collaboration with celebrated commercials director Ridley Scott led to his scoring of the director’s debut feature THE DUELLISTS in 1977.

Blake’s most prolific film composing period followed with a string of features including THE RIDDLE OF THE SANDS, S.O.S. TITANIC, FLASH GORDON, THE LORDS OF DISCIPLINE. In 1982, Blake accepted the invitation to write the music and lyrics for an animated film, THE SNOWMAN. Instantly hailed as a classic, the score topped the British pop charts and the concert work is still regularly performed around the world each Christmas.

In 1989, he won the BFI Anthony Asquith Award for Best Musical Score for A MONTH IN THE COUNTRY. Since the mid-1980s, Howard Blake has been the Musical Director of the Sinfonia of London, a leading film session orchestra. The composer was awarded the Order of the British Empire in 1994 for his artistic contributions in music.

Dragon’s Domain Records presents HOWARD BLAKE: GHOST STORIES, featuring music from THE CANTERVILLE GHOST and AMITYVILLE 3-D. THE CANTERVILLE GHOST is presented for the first time on this release and AMITYVILLE 3-D includes previously unreleased music. The music has been remasterd by James Nelson at Digital Outland. The booklet contains liner notes written by noted author Randall Larson, including insights by composer Howard Blake on the creation of these ghostly scores.