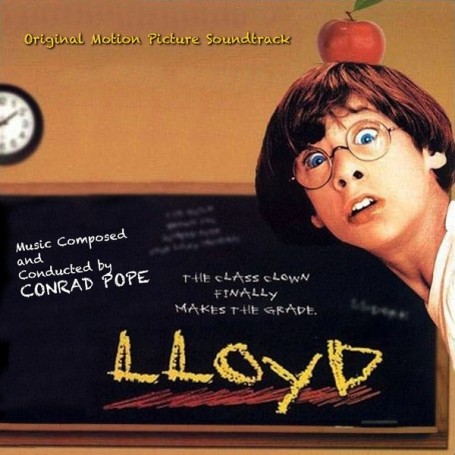 Filmed in 1995 and not released publicly until 2001, LLOYD tells the story of a sweet and funny 11 year old class clown who is always getting himself into trouble with his teachers. After one joke too many, Lloyd finds himself banished to a remedial class. On his way to oblivion, Lloyd meets Tracy, a demure redheaded girl in denim shorts and he is immediately smitten. Fueled by his newly discovered crush, Lloyd becomes determined to climb his way back up the social ladder with the help of his younger brother, his best friend and a struggling local magician (Tom Arnold) who is the only adult to accept Lloyd for what he truly is, a spirited and adventurous young kid who is frequently underestimated. Accompanying Lloyd on his quest is a heartfelt orchestral score exquisitely composed by Conrad Pope. His music for LLOYD is bold, boisterous, acrobatic, sentimental, packed with vibrant orchestral colors, and anchored by memorable themes.

Dragon’s Domain Records is excited to bring LLOYD to compact disc for the first time. The music has been mastered by James Nelson at Digital Outland, with liner notes written by author and composer Brian Satterwhite, including the participation of composer Conrad Pope and writer/director Hector Barron.

LLOYD is a limited edition release of 500 units.