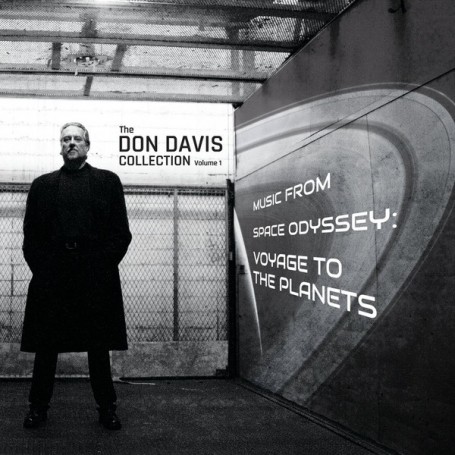 THE DON DAVIS COLLECTION: VOLUME 1 (MUSIC FROM SPACE ODYSSEY: VOYAGE TO THE PLANETS)

Dragon’s Domain Records, presents THE DON DAVIS COLLECTION, VOLUME 1 featuring music from SPACE ODYSSEY: VOYAGE TO THE PLANETS, a two part science fiction docudrama from 2004 created by the makers of WALKING WITH DINOSAURS, written and directed by Joe Ahearne and featuring the narration of actor David Suchet (POIROT).

SPACE ODYSSEY: VOYAGE TO THE PLANETS (broadcast in shortened form as VOYAGE TO THE PLANETS AND BEYOND in the US) is a BBC science fiction adventure told in documentary style about an international crew of scientist/astronauts exploring the solar system. Originally titled WALKING WITH SPACEMEN, SPACE ODYSSEY: VOYAGE TO THE PLANETS imagines a six-year mission undertaken by a crew of five, piloting the nuclear thermal rocket-powered Pegasus spacecraft. The crew face a number of hardships and disappointments along the way, which provide dramatic adventure and danger between the various interactions experienced by the crew.

The music for SPACE ODYSSEY both energizes the story with a powerful sense of discovery and also pride in accomplishment for the mission fictionalized in the film. It’s a powerful work with a strong main theme and containing some of the composer’s most affecting music. Davis created the score using the most advanced digital samples available at that time, and a session with the BBC Concert Orchestra. The score is built around one primary theme and two subordinate motifs. The main theme is heroic, rich in the joy of discovery, the thrill of exploration, and a sense of honor toward the amazing excursion being undertaken. With the orchestra used primarily to express the sweeping variations of the main theme, the electronics provide eerie music to describe the planets visited by the Pegasus crew, as well as those situations where the astronauts are in danger. While he found configuring and managing the electronic array for the score challenging, Davis regards scoring SPACE ODYSSEY as a positive experience.

Emmy winning composer Don Davis began playing trumpet and piano at the age of nine, and started writing music at twelve. As his affinity for music grew, so did his aspirations, and soon he was composing and arranging orchestral charts for local jazz ensembles that he also performed with. After graduation from high school, Davis furthered his study of music at UCLA, majoring in music theory and composition, playing trumpet in college jazz ensembles and orchestras. After graduation from UCLA, Davis continued to study composition with Henri Lazarof and orchestration under Albert Harris. Harris introduced the young Davis to film and television composer Joe Harnell, best known for his work on TV shows such as V and THE INCREDIBLE HULK. He was immediately impressed by Davis' attention to orchestral detail, especially as evidenced by a chamber symphony Davis was writing at the time. Harnell became a mentor to Davis and introduced him to the professional world of film and television scoring. His early compositional work caught the attention of composer Lee Holdridge, who had penned the theme music for the television series BEAUTY AND THE BEAST and he helped Davis land the job composing weekly scores for the show. Davis' rich orchestral style meshed perfectly with the tone of the show and he went on to win an Emmy for his work and achieve great acclaim as one of television's most gifted young composers.

After BEAUTY AND THE BEAST, Davis found his career as a composer soaring and he was commissioned to compose scores for dozens of top television movies and series, including SEAQUEST DSV, HOUSE OF FRANKENSTEIN, Peter Benchley’s THE BEAST, TINY TOON ADVENTURES and STAR TREK: THE NEXT GENERATION. In 1997, Davis composed the score for Larry and Andy Wachowski's off-beat thriller BOUND, and the directing brothers immediately formed a close working relationship with Davis. The Wachowskis and Davis again collaborated on the MATRIX Trilogy. Davis' work for the three scores incorporated elements of popular music, electronic synthesizer effects, and even a touch of the avant-garde.

Dragon’s Domain Records presents THE DON DAVIS COLLECTION, VOLUME 1, featuring the world premiere of the composer’s music from SPACE ODYSSEY: VOYAGE TO THE PLANETS, with liner notes written by author Randall Larson, including the participation of the composer, mastered by James Nelson at Digital Outland.

THE DON DAVIS COLLECTION, VOLUME 1 is a limited edition release of 500 units.