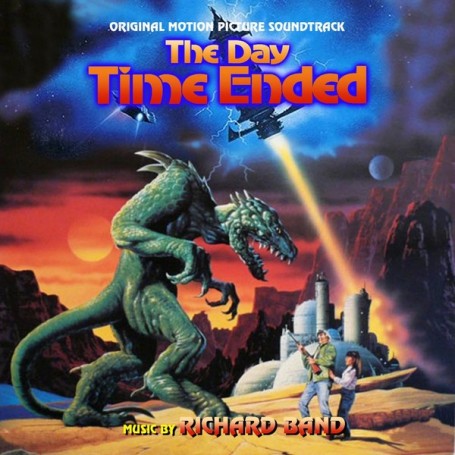 Composer Richard Band emerged in the late 1970s as a horror music specialist. It was an appropriate legacy, being the son of prolific filmmaker Albert Band and the younger brother of Empire Pictures/Full Moon Entertainment’s genre specialist Charles Band. Richard began his association with film music in 1978 with the unique electronic score to LASERBLAST. The score was composed in collaboration with Joel Goldsmith, son of movie maestro Jerry Goldsmith. Band’s second score was for Charles’ production of THE DAY TIME ENDED, produced in 1978 but not released until 1980 by Compass International Pictures.

The film’s small cast of just six people make up a kind of extended nuclear family whose escape from city life for the high desert becomes a struggle against the strange and bizarre situations they encounter. As their remote ranch home is invaded by a miniature gremlin, a compact, heat-ray-armed spaceship the size of a large toaster, buzzed by glowing flying saucers, and threatened by pudgy, battling monsters, they are finally transported through a space/time warp into another planet or perhaps dimension, gathering together to perhaps share a bright new future in a shining city of light.

Because LASERBLAST had pleased both Compass International and Charles Band Productions, Richard was brought in to the production, but not initially as its composer. His function was more as a line producer. Having done LASERBLAST, Band’s compositional credit was good, even with a credit of just one score, and he got along well with director Bud Cardos. They would work together again a few years later on MUTANT. Cardos was willing to have him write the film’s music and to record it with an orchestra. Remarkably, Band was able to get a 35 piece orchestra in London to record the score. Band had worked with music producer Don Perry on several projects previously, and it was Perry who set up the session at the Music Center in Wembley, London. Perry brought in British music contractor John Watson, who put together the musicians and also conducted the orchestra for two three-hour recording sessions. Joel Goldsmith served as the score’s sound mixer.

A challenge Band faced on this score was figuring out how to make a small orchestra sound big, knowing he was restricted to just 35 players. The answer was in the way he orchestrated the music. Band kept the orchestration relatively simple, mainly because he knew he had a lot of music to record in those two three-hour sessions, so it couldn’t be too complicated. He also orchestrated it in a way that the keys and instrumentations were a little bit thicker than they would be in certain other keys, making the sound a bit richer. Band took composing the music for the film very seriously, focusing on the emotional resonance of the characters and their situation to serve the storyline, such as it was. He creates a very structured score, essentially allowing his music to speak for what the final shooting script does not.

For this new remix of Richard Band’s THE DAY TIME ENDED, Dragon’s Domain Records has gone back to the original 24-track master from CTS in London, offering for the first time the unparalleled depth of sound remixing the score from that original master could achieve, digitally remastered by James Nelson at Digital Outland, including liner notes written by author Randall Larson, with the participation of the composer.