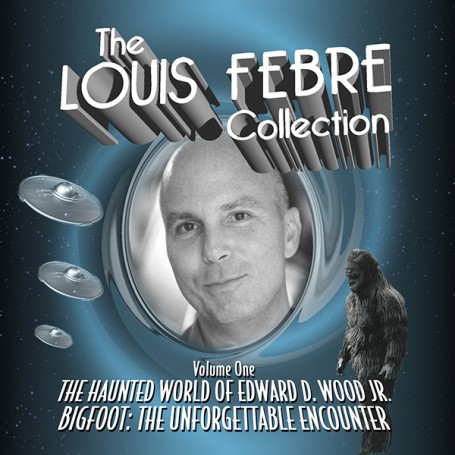 BIGFOOT: THE UNFORGETTABLE ENCOUNTER was one of the many films Louis Febre scored for PM Entertainment. Released in 1994, BIGFOOT tells the tale of a young boy named Cody who befriends one of the legendary forest creatures in the Pacific Northwest wilderness, and then risks his safety to save the Bigfoot when hunters place a bounty on the creature’s head. Zachary Ty Bryan, known for his role as the older son on Tim Allen’s long-running TV series HOME IMPROVEMENT, plays Cody, supported by Matt McCoy, David Rasche, and Crystal Chappell, with Gary Maloncon playing the ape-like Bigfoot. Febre’s score is appropriately family friendly music, nothing too aggressive or scary, but quite melodic and the score fits the tone of the lighthearted adventure film, focusing on the character interaction and the moderate skirmishes in the storyline.

Brett Thompson’s 1996 documentary film THE HAUNTED WORLD OF EDWARD D. WOOD JR. was a sincere labor of love, tracing in detail the strange and perhaps unsettling career of the low-budget filmmaker whose means never seemed to meet the needs of his creative ambitions. Wood’s five feature films of the 1950s, GLEN OR GLENDA, JAIL BAIT, BRIDE OF THE MONSTER, NIGHT OF THE GHOULS, and the infamous PLAN 9 FROM OUTER SPACE, have given the cross-dressing filmmaker his legendary status as “the worst filmmaker of all time”. Told through a myriad of film clips, newly-filmed set pieces, and intriguing (perhaps even shocking) interviews with a unique cadre of actors, associates, ministers, and girlfriends, the film is at once a tribute, scandal, and fascinating examination of the Man Behind The Plan; and a carefully researched biography that stays closer to the truth than much else that has been written or filmed about Edward Wood Jr. Febre composed a delicate and compelling score with moments of striking melody and fragrance, from the serenity of his prologue music through the various pieces accompanying Wood’s story and culminating with the melancholy denouement.

Louis Febre is a Mexican born composer who began his career and honed his trade by scoring a plethora of low-budget action and family films. He is best known for his work on the television series SMALLVILLE (2007-2012) as well as ABC’s 2011 TV reboot of CHARLIE’S ANGELS, the CBS 2000-2001 remake of THE FUGITIVE, and the 1997 syndicated series THE CAPE. Febre shared an Emmy win with co-composer John Debney for the pilot episode of THE CAPE. He has collaborated with other composers as orchestrator or additional music composer on projects such as THE X-FILES, DESPERATE HOUSEWIVES, CATS & DOGS, JIMMY NEUTRON, CHICKEN LITTLE, ONCE UPON A TIME IN WONDERLAND, and more.

Dragon’s Domain Records presents THE LOUIS FEBRE COLLECTION, VOLUME 1 on compact disc for the first time, featuring music composed by Louis Febre. The music has been mastered by James Nelson at Digital Outland and includes liner notes written by author Randall Larson with the participation of the composer.