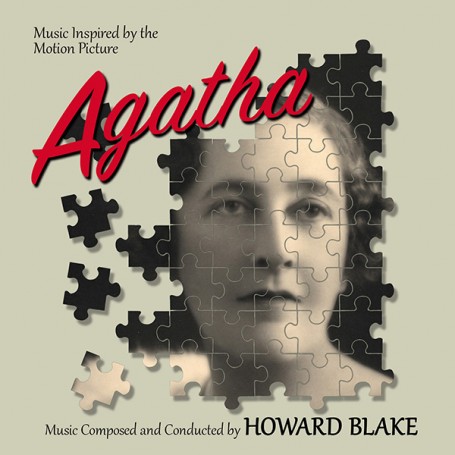 Dragon’s Domain Records will be releasing AGATHA – MUSIC INSPIRED BY THE MOTION PICTURE featuring music composed and conducted by Howard Blake (THE DUELLISTS, THE RIDDLE OF THE SANDS, THE SNOWMAN) but ultimately not used for the 1979 feature film directed by Michael Apted (21 Up series, GORILLAS IN THE MIST, THUNDERHEART, ENIGMA) and starring Vanessa Redgrave, Dustin Hoffman, Timothy Dalton, Helen Morse and Celia Gregory.

In 1926, legendary mystery writer Agatha Christie disappeared for 11 days. To this day, no one knows the details of what she did during that period of time. AGATHA presents a fictional account of Christie’s time away, showing her as a woman fleeing from her own life following the death of her mother and the announcement from her husband that he’s leaving her. Fleeing to a spa in Harrowgate while the whole country is looking for her, American reporter Wally Stanton (Hoffman) finds her and ultimately tries to help her.

Howard David Blake was born in the London borough of Enfield in 1938. At the age of eighteen, he was awarded the Hastings Festival Scholarship and attended the Royal Academy of Music where he studied piano and composition. His interest in the cinema led him to a number of outside jobs and he worked as a projectionist at the National Film Theatre. Turning down a second scholarship from the British Film Institute, Blake instead became a piano session player, arranger and orchestrator at Abbey Road and other studios for several composers, including Stanley Myers, Quincy Jones and Bernard Herrmann. It was Herrmann who introduced Blake to Laurie Johnson, staff composer for THE AVENGERS, leading to his first television scoring assignment in 1967. His work in television and advertising music continued and his frequent collaboration with celebrated commercials director Ridley Scott led to his scoring of the director’s debut feature THE DUELLISTS in 1977.

Blake’s most prolific film composing period followed with a string of features including THE RIDDLE OF THE SANDS, S.O.S. TITANIC, FLASH GORDON, THE LORDS OF DISCIPLINE. In 1982, Blake accepted the invitation to write the music and lyrics for an animated film, THE SNOWMAN. Instantly hailed as a classic, the score topped the British pop charts and the concert work is still regularly performed around the world each Christmas.

In 1989, he won the BFI Anthony Asquith Award for Best Musical Score for A MONTH IN THE COUNTRY. Since the mid-1980s, Howard Blake has been the Musical Director of the Sinfonia of London, a leading film session orchestra. The composer was awarded the Order of the British Empire in 1994 for his artistic contributions in music.

Dragon’s Domain Records presents the world premiere release of Howard Blake’s music for AGATHA. While his music was ultimately not used in the film, it was composed during one of his most prolific years and worthy of preservation. The booklet contains liner notes written by noted author Randall Larson, including insights by composer Howard Blake on the creation of the score.