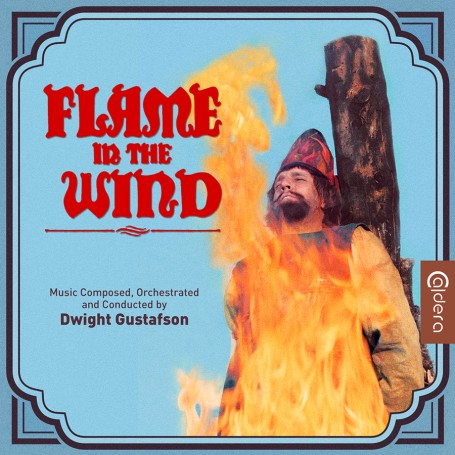 FLAME IN THE WIND / SHEFFEY

Caldera Records is proud to present the original scores for the motion pictures “Flame in the Wind” and “Sheffey” from 1971 and 1977 respectively.
Both films were produced by Unusual Film, a division of Bob Jones University in Greenville, South Carolina. “Flame in the Wind” is set during the time of the Spanish Inquisition and follows a young man named Carlos who is faced with a conflict throughout the course of the motion picture: should he, horrified by the Inquisition, follow the Bible, or adhere to religious tradition?
“Sheffey” was an even bigger undertaking, a lavish and expensive production: Born in 1820, Robert Sheffey was a Methodist evangelist who spent his lifetime taking care of those in need, traveling through Virginia and Tennessee and preaching the word of God.
The music for both films was composed by Dwight Gustafson. Born in 1930, Gustafson was named acting dean of the School of Fine Arts at BJU at 24. He served as administrator, taught, composed, conducted and preached until his retirement in 1997.
The music for “Flame in the Wind” is based around three themes which recur throughout the score, which was issued on an LP by Unusual Films in 1971. Gustafson wrote a leitmotif for the film’s hero Carlos which is supposed to reveal the pathos and heroism of the young man as he tries to find his way. The second theme, a rather eerie, instrumental melody for the Inquisition expresses the repression and terror for which the inquisitors are responsible, while a triumphant chorale seeks to honor the true believers who have lost their lives due to their faith in Jesus Christ during the Spanish Inquisition.
“Sheffey” follows a different musical conception, although Gustafon’s style is unmistakable. Since the film, through the life of Robert Sheffey, tells the story of folk religion, Gustafson decided to employ various folk tunes as seemed appropriate to backbone for his score.
Both “Flame in the Wind” and “Sheffey” were composed, orchestrated and conducted by Dwight Gustafson and recorded with the Bob Jones University Symphony Orchestra, composed of students and faculty. LPs of both scores were made available by Unusual Films/BJU to coincide with the film releases.
The 35th Caldera CD features a detailed booklet-text by Stephan Eicke and elegant artwork by Luis Miguel Rojas. The CD was mastered by Richard Moore and produced by Stephan Eicke and John Elborg.