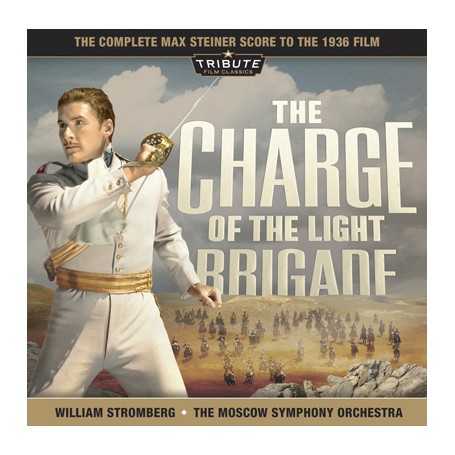 THE CHARGE OF THE LIGHT BRIGADE (COMPLETE RE-RECORDING)

For this epic story, Steiner musically conveys the majesty of British colonialism in India, convincingly colors the malevolence of Surat Khan’s treachery, and drives deep into consciousness the horror of Khan’s massacre of women and children. And then there is the final glorious charge itself, a nearly 10-minute tour de force of exhaustive orchestral power.

Conductor William T. Stromberg says, “Performing the final climactic charge, captured in stunning clarity by Alexander Volkov’s expert recording, was nothing short of hair-raising and one of the most unforgettable experiences of my life.” As with previous Tribute recordings, Stromberg conducts the Moscow Symphony Orchestra in its most demanding performance to date.

“I was beyond thrilled when conductor Bill Stromberg took the baton and we started recording this score,” says orchestration reconstructionist John Morgan, who worked from Steiner’s original sketches housed at Brigham Young University. “It includes some of the most difficult music to perform on both the technical and interpretive levels. Steiner wrote long sweeping music that followed the action and dramatic needs of the film... An old Hollywood musician’s saying was, ‘To perform a Steiner score properly, one must bleed.’ And we had our share of blistered lips, calloused fingers, and very tired musicians by day’s end. But Bill was able to capture that wonderful Steiner sound as no other contemporary conductor has.”

Executive producer Anna Bonn adds, “The Charge of the Light Brigade’s score was among the most ambitious writing of Steiner’s film scoring career. We knew going into this project that the Warner Bros. studio orchestra had played this music once before, so it would not be impossible to do it again . . . Bill’s enthusiastic conducting was like I’d never seen before. It took an incredible amount of energy to keep up the momentum of the massive orchestra.”

In addition to his complete score for The Charge of the Light Brigade, the 2-CD set includes Steiner’s music for a promotional short subject on the film (with alternate arrangements) and a special bonus track of his music for the trailer to Arsenic and Old Lace. The full-color booklet is wonderfully designed by Jim Titus and features notes from the Tribute principals and James V. D’Arc. A production history of the film and extensive cue-by-cue analyses are by film historian J. B. Kaufman.