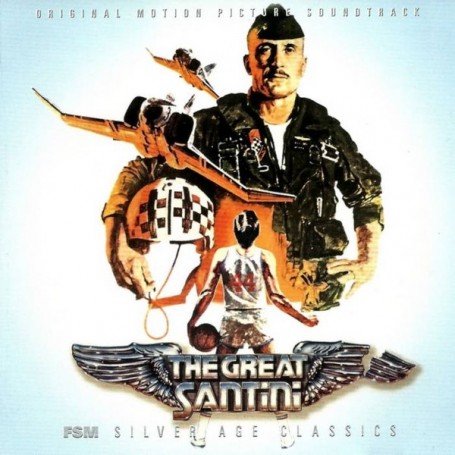 The Great Santini (1979) was novelist Pat Conroy’s semi-autographical tribute to his father, a Marine fighter pilot who struggled with being a loving father and husband while keeping up his aggressive machismo image. The film featured Oscar-nominated performances by Robert Duvall as Col. “Bull” Meechum and Michael O’Keefe as his eldest son, Ben. Blythe Danner played Meechum’s wife, Lillian.
In the late ’70s and early ’80s, Elmer Bernstein seemed temporarily type-cast as a composer of low-brow comedies such as Animal House, Meatballs and Airplane!, but his score for The Great Santini amply demonstrated his undiminished gift for poignant and emotional drama. The lyrical melodies he composed for Santini perfectly capture the film’s characters and their complex interrelationships.  In addition to these evocative themes, suitably percussive, dissonant and dramatic passages mirror the darker elements of the story.

There are several source music cues in the film—including an arrangement of Henry Mancini’s “Moon River” (from Breakfast at Tiffany’s) by Bernstein’s orchestrator, David Spear—that reflect the story’s early 1960s time-frame.

With the exception of two cues taken from the film’s monaural music stem, this premiere presentation of Bernstein’s complete score for The Great Santini has been mixed from the original Warner Bros. 1/2" three-track stereo masters. In addition, FSM has included a delightful bonus (recorded during the Santini sessions but not related to the film): a march Bernstein composed for the inauguration of Charles Huttenback as the third chancellor of the University of California, Santa Barbara.

The 16-page booklet designed by Joe Sikoryak contains films stills, poster art, and notes on the film and music by Scott Bettencourt and Frank K. DeWald. Additional background information is also available—for free—at FSM’s growing repository of online notes. The Great Santini is a prime example of the art of film scoring by one of its greatest practitioners and makes a significant addition to the FSM catalog of Bernstein titles.