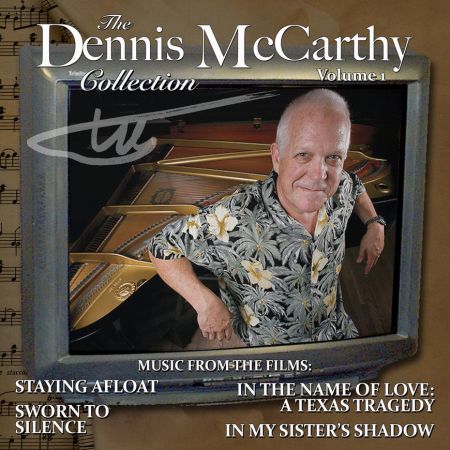 This collection focuses on the latter, presenting the music McCarthy wrote for a quartet of television movies in the ‘80s and ‘90s. STAYING AFLOAT (1993) was a TV pilot starring Larry Hagman as a troubled heir who becomes an FBI informant in order to make ends meet. McCarthy composed a cool Henry Mancini-esque jazz score that was light and frothy and kept the show upbeat and fun. SWORN TO SILENCE (1987) starred Peter Coyote and Dabney Coleman as attorneys defending a serial killer; when the suspect informs them where he buried the bodies they realize he’s guilty, but as his lawyers they are unable to reveal the information. The drama featured a very dark score that mixed orchestra with electronics. This was one of the scores that McCarthy used as a demo that got him hired to score STAR TREK: THE NEXT GENERATION.

IN THE NAME OF LOVE: A TEXAS TRAGEDY (1995) is a crime of passion story about the grandson of a rich Texas oil tycoon who falls in love with a poor girl from the wrong side of the tracks. Complications arise and someone ends up being murdered as tensions heat up; the movie was loosely based on a true story. McCarthy focused on the Texas location and went back to his country/pop roots to create a bluesy/bluegrass/country music score that underlines the day-to-day lives of the characters while reinforcing the tragic storyline as it unravels. The Lifetime TV-movie IN HER SISTER’S SHADOW (1997) is about a woman who secretly dates her sister’s ex-boyfriend, gradually realizing he is unstable and dangerous. McCarthy’s orchestral score ran the line between romantic music and suspenseful tension as the story plays out.

Each of these scores was written for relatively small ensembles, but it’s a testament to McCarthy’s talent that he makes them sound so much more than that. None of the scores have been released before. Dragon’s Domain Records is excited to present these scores for the first time and allow them to be appreciated. The album has been mastered by James Nelson at Digital Outland and features exclusive liner notes by author Randall D. Larson. THE DENNIS McCARTHY COLLECTION, VOLUME 1: THE TELEVISION MOVIES is presented in a limited edition of 500 units.