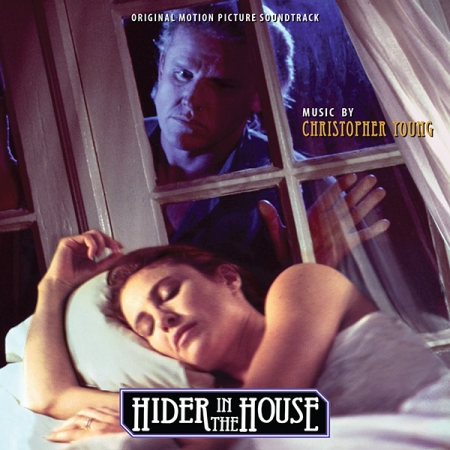 HIDER IN THE HOUSE (REISSUE)

Reissue of vivid 1989 Christopher Young soundtrack for a new generation of his fans! Matthew Patrick directs, Lem Hobbs scripts, Mimi Rogers, Michael McKean play husband and wife against a troubled “hider” in the family attic, the volatile Tom Sykes, played by a dynamic Gary Busey. Christopher Young scores for orchestra minus clarinets, trumpets, including wordless chorus. Inspired writing takes listener on a musical journey through both the tortured mind of the “hider” and a sometimes idyllic, sometimes conflicted world of the married couple. A wealth of complex string ideas, tremolos, harmonics, glissandos and other effects fill one portion of the score while chimes, percussion, flute, French horn, trombone all bring striking color to everything. Amongst the coolest ideas are Young’s frequent use of bitonal chords that shift in and out, adding harmonic complexity without relying simply on dissonance. For Young’s fans of his intense thriller voice, fear not. He devotes ample time to his aggressive horror idiom. Standing out in this regard are furious orchestral outbursts during the lengthy 18-minute “The Hider” sequence and powerful low brass-dominated rhythmic figures during “Reversing Colors”. But Young also creates moving family material courtesy both an exposed four-note “duet” motif for bells & vibraphone, several warm passages for strings, lean ideas for solo French horn and - especially - some haunting material for chorus based on the four-note duet motif, now broadened into a fully-rounded, emotionally saddened theme. When Intrada first released this score in 1990, Young personally worked at length to build a cohesive “musical narrative” of the sometimes warm, sometimes, chilling and sometimes terrifying score in large pieces rather than a just a succession of customarily short cues. This included drafting by hand a detailed flowchart of the musical sequences, divided into segments and bars, all designed to  bring the listener into the mind of a tortured and violent individual juxtaposed against a more reflective and serene backdrop. This new mastering of the original album follows that intricate sequencing without change. Owners of that initial release need not apply, albeit modest enhancements to sound and packaging might attract. Another asset: Informative notes from John Takis. Updated graphic design by Kay Marshall. Christopher Young, Jeff Atmajian orchestrate, Jeff Vaughn engineers, Christopher Young composes, Allan Wilson conducts the Graunke Symphony Orchestra. Intrada Special Collection CD available while quantities and interest remain!