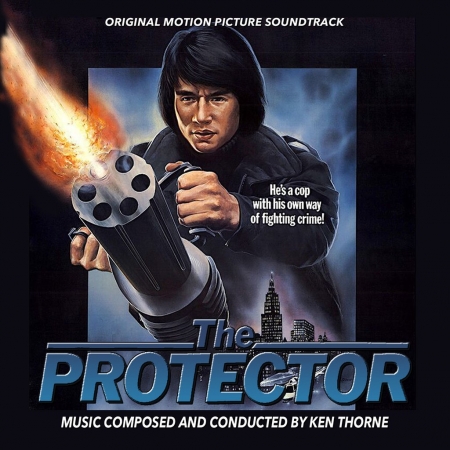 After achieving success in Hong Kong, Jackie Chan attempted to conquer the American film market in 1980 with THE BIG BRAWL, directed by Robert Clouse, who’d had success with Bruce Lee in ENTER THE DRAGON and GAME OF DEATH. But Chan’s movie failed to ignite a favorable commercial regard at a time when audiences were eager for the hard-edged kung fu style advanced by Lee, who’d died unexpectedly in 1973. Chan’s more humorous style of martial arts just didn’t click. He tried once more in 1985 with THE PROTECTOR, directed by James Glickenhaus (THE SOLDIER, SHAKEDOWN, TIMEMASTER), but it too suffered from disappointing box office returns. It would take a few more years before Chan was able to emerge in the US as a superstar in his own right.

But THE PROTECTOR remains a fascinating stepping stone in Chan’s career and a tangible testimony to the actor’s unique cinematic style which audiences around the world have grown to admire. Glickenhaus, however, wanted to make a gritty R-rated crime thriller while Chan sought to steer the narrative into a vehicle for jaw-dropping fight sequences peppered with his own unique brand of slapstick humor. Glickenhaus’ vision won the day and, while not a commercial hit, eventually reached a degree of financial success when it was released to television and home video.

The film’s music was composed by English-born, Academy Award-winning composer Ken Thorne. Known for scoring an eclectic variety of films such as the underscore for The Beatles’ HELP! (1965),HOW I WON THE WAR(1967), INSPECTOR CLOUSEAU(1968), THE EVIL THAT MEN DO(1984), and TV’s RETURN TO LONESOME DOVE (1993), Thorne is probably best remembered for adapting John Williams’ themes from 1978’s SUPERMAN for the sequel scores of SUPERMAN II(1980), and SUPERMAN III(1983). Thorne pumps up the PROTECTOR with straightforward action music reflecting life on New York City’s mean streets. Featuring bass ostinati driven by low brass, sick-kicking drums, a dynamic horn section, and an arsenal of synthesizers modern to their day, Thorne blends electronica, funk, jazz, big band, pop, and a little bit of everything else into a propulsive and engaging score.

Dragon’s Domain Records is excited to bring this score to compact disc for the first time. The score has been mastered by James Nelson at Digital Outland and features exclusive liner notes by composer and author Brian Satterwhite.

THE PROTECTOR is a limited edition of 500 units.