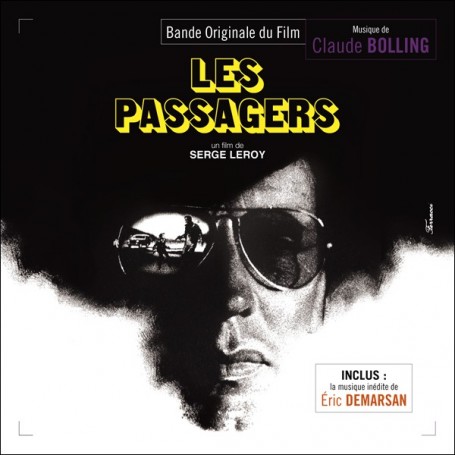 Adapted from a novel by Dean Koontz (who wrote under the name K.R. Dwyer), Les Passagers / The Intruder (1976) depicts a breathless pursuit taking place between Italy and France starring Jean-Louis Trintignant, Mireille Darc and Bernard Fresson.

Music Box Records presents for the first time ever on CD two unreleased scores written for Serge Leroy's Les Passagers that of Claude Bolling which came to replace the music originally composed by Éric Demarsan. Though this phenomenon of replacing scores is common in the United States, it is rarer in Europe. The music that is unused is not necessarily of poor quality, but simply does not correspond to the expectations of a given director or producer. Indeed, instead of asking the musician to revisit his work, the person in charge of the film prefers to solicit a fresh eye. In France, for example, well-known is the case of Jean-Pierre Melville rejecting the music of Michel Legrand for Le Cercle rouge, this latter being replaced by… Éric Demarsan.

Regarding Les Passagers, Éric Demarsan composed his music around the child, an essential character in the story, and of his relationship with his new father “pretty hip to his style.” Piano, glockenspiel, vibraphone and xylophone combine to infuse a melancholic and mysterious lightness right before the opening titles. The second strong theme of the film, that of the menace represented by the black van, is more dissonant based on brass and woodwinds, with touches of piano and xylophone.
With Claude Bolling, the main theme of the film became a jazz lullaby on piano to a nonchalant tempo, supplemented by simple bass and guitar, then relayed to a dynamic string ensemble underlying the cheerful and tranquil stretches of their trip. By contrast, the scenes of suspense generated by the chase with the van are represented by oppressive string movements and saxophone.

In collaboration with Warner Chappell Music France, Claude Bolling and Éric Demarsan, Music Box Records presents both scores for the first time on CD and transferred from the original master tapes. The limited edition of 500 units comes with an 8-page booklet with French and English commentary by Gilles Loison.